Government bond yields dropped in May against a background of heightened market volatility and geopolitical turmoil. Only Europe’s peripheral economies bucked the trend, with the yield on Italy’s 10-year benchmark note experiencing a 107 basis point swing over the course of the month, closing at 2.85%. This surge pushed the gap against its German equivalent to a notably wide 253 basis points, significantly up from April’s 121 basis points. A new coalition government drawn from the anti-establishment Five Star Movement and the right-wing League was formed in the country, ending months of political deadlock.

Spain’s 10-year bond mid-yield also increased by 22 basis points, closing at 1.49% on May 31. The security’s spread over the German 10-year Bund widened to 117 basis points, up 46 basis points on the previous month end. Spain’s economic growth was 0.7% in both Q4 2017 and Q1 2018, according to data reported by the National Statistics Institute. A corruption scandal led to the removal of Prime Minister Mariano Rajoy, who was replaced with Pedro Sanchez. Trading volumes for both Italian and Spanish debt surged on the Tradeweb European government bond marketplace in May, surpassing platform activity during the Catalonian independence vote.

In neighbouring Portugal, the 10-year bond mid-yield rose 31 basis points to finish the month at 1.97%, while its Greek counterpart increased by 73 basis points to 4.54%. The Greek-German 10-year spread widened to 422 basis points, compared to 325 basis points in April. In the latter half of May, Prime Minister Alexis Tsipras unveiled a strategic growth plan ahead of the country’s bailout program exit in August.

Conversely, Germany’s 10-year Bund mid-yield closed at 0.32%, a drop of 24 basis points over the month. The German Federal Statistical Office noted that the country’s growth had halved in the first quarter of the year, after expanding by a seasonally-adjusted 0.3% on a quarterly basis. Meanwhile, the UK’s Office for National Statistics confirmed a prior estimate that GDP growth had fallen to 0.1% in Q1 2018. Earlier in the month, the Bank of England voted 7-2 in favour of leaving its monetary policy unchanged. The yield on the 10-year Gilt dropped 20 basis points to end May at 1.22%.

In the U.S., the 10-year Treasury mid-yield finished May 11 basis points lower at 2.82%. The country’s economy grew at a slower pace of 2.2% in the first three months of the year, compared to a preliminary reading of 2.3%. Elsewhere, Japan’s 10-year mid-yield fell by two basis points to close at 0.03%, as its central bank’s pledge to maintain it around the 0% level continues. 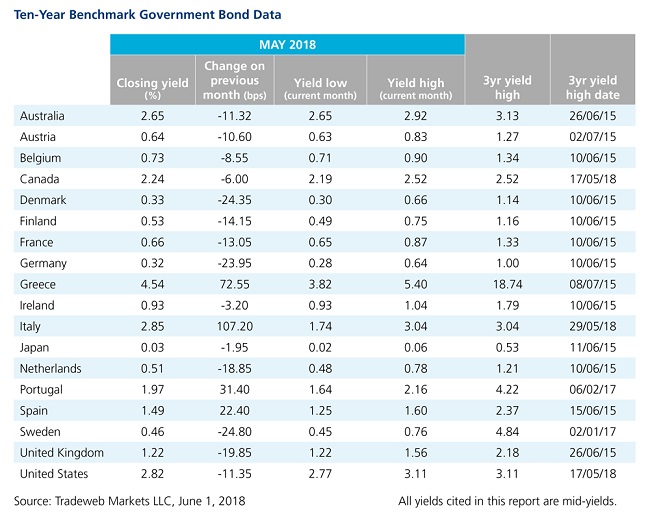