This article looks at the USD Interest Rate Swap volumes reported by CME and LCH in the five weeks post the June 10 mandatory clearing deadline.

Following on from my article of June 25th, Mandatory Clearing, June 10, Week Two and CME or LCH, I wanted to update the figures with more recent data.

So focusing only on USD IRSwaps and having taken the daily figures from the CME and LCH websites, I created weekly volume figures, which are shown in the charts below. 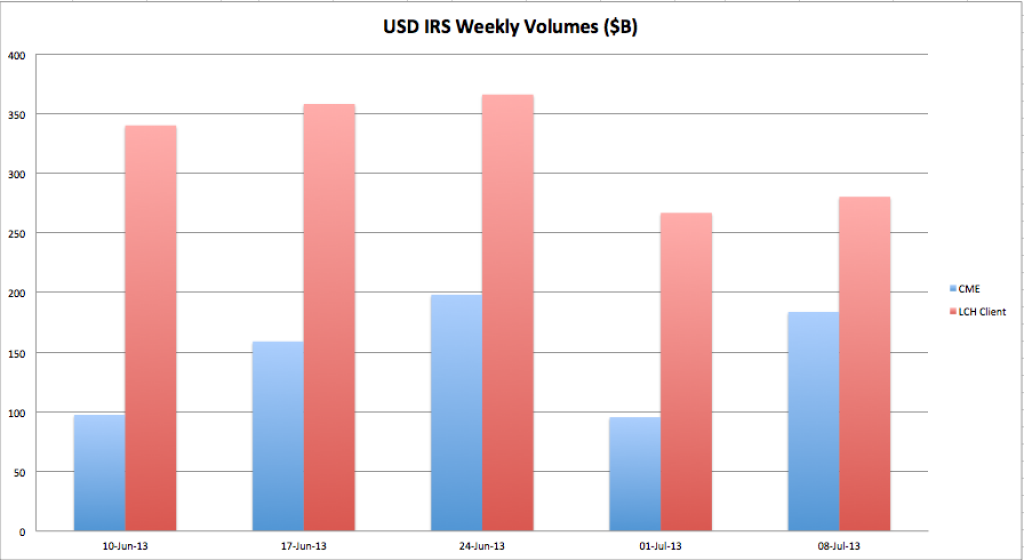 From these we can observe that over the five week period since June 10:

This suggests that CME has gained more client clearing volumes from the June 10 mandatory deadline than LCH. The recently launched LCH Swapclear US-Domiciled LLC does not yet appear to have meaningful volume; see here for the figures.

It will be interesting to see how these volumes develop in the coming weeks -- not least because, as my recent article on the LCH Swapclear margin details, the LCH move to a higher initial margin (improved defaulter pays) and lower guarantee fund contribution (members pay) is likely to mean that Clients will face lower initial margin requirements from CME than LCH ... particularly from October 2013, when the Sept. 2008 scenarios (Lehman bankruptcy, etc.) fall out of the 5-year look-back window used by CME.

It will be interesting to see the volumes in the 4Q 2013.