The election of Donald J. Trump as the 45th President of the United States shocked institutional financial markets around the world.  Global markets reacted with extreme volatility immediately following the announcement in the early morning hours of November 9, 2016, raising fears of a potential market shock that never happened. Instead, the Dow Jones Industrial Average rallied, closing at record highs for two straight days.

While these broad stroke market moves have made the headlines, an analysis of institutional trading activity in global bond, derivatives, and ETF markets provides an even deeper look into the investor psyche as the election results unfolded. Tradeweb Markets, a leading operator of electronic markets for government and corporate bonds, swaps, mortgage-backed securities, and ETFs is uniquely positioned to capture this sentiment by tracking trading volumes on its platform in the hours and days immediately surrounding the election.

With the following election postmortem, we offer a detailed play-by-play through the eyes of institutional traders as they absorbed and started trading on the news of the Trump win.

In terms of the composition of that volume, the bulk of it was centralized in the 1.5 to 10-year maturity range.  The following table breaks out total U.S. Treasury market volume by maturity on November 9th: 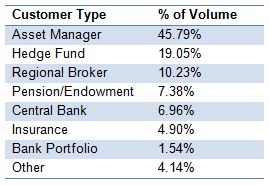 Buyers outpaced sellers in the immediate run-up to the election, though the pace of U.S. Treasury buying slowed as the results of the election became clear. The following table depicts the percentage of buying versus selling across all U.S. Treasury securities on the Tradeweb platform November 7th-9th:

In terms of liquidity, the average bid/offer spread for 2-year, 10-year, and 30-year securities has increased following the election, with the most significant widening occurring in the 30-year maturity range.  The following table depicts bid/offer spreads between October and November 9th:

U.S. derivatives trading also saw significant volume on Tradeweb in the run-up to and immediate aftermath of the election.  Interest Rate Swaps (IRS) trading volume increased roughly 59% from November 8th to November 9th, with a significant surge in volume occurring at 2:00 AM November 9th when it started to become clear that Trump would win.

The impact of the U.S. election was immediately apparent in European derivatives and ETF markets as well.  When benchmarked against total trading volumes for the third quarter of 2016, total volumes in Credit Default Swaps (CDS), IRS, and ETF markets on Tradeweb more than doubled on election night 2016 and continued to surge through November 10th.  The table below depicts the magnitude of average daily trading volume increase across the three asset classes using Q3 2016 as a benchmark for “normal” market volumes:

With bond markets closed in the U.S. on Friday, November 11, market participants have had a chance to pause on the rapid-fire trading that accompanied the dramatic election results. So far this week, both trading volume and volatility have appeared to normalize in the U.S. and Europe.  We will continue to watch for any signs of sustained volatility in the days and weeks that follow.