Government bond yields started rising again in September, following several months of record-low levels around much of the globe. Only Greece and Italy bucked the trend, with the mid-yield on their 10-year benchmark notes dropping by 22 and 21 basis points to end the month at 1.27% and 0.81%, respectively. Greek Prime Minister Kyriakos Mitsotakis announced tax changes and structural economic reforms aimed at rebuilding confidence with the country’s investors. Meanwhile, his Italian counterpart Giuseppe Conte took over a coalition government amid ongoing discussions with the European Commission on how to balance debt reduction and economic growth.

Elsewhere in Europe, the largest upward move came from Germany’s 10-year Bund yield. Despite an increase of 13 basis points, it finished in negative territory for the fifth consecutive month, this time at -0.58%. On September 12, the ECB cut its deposit rate from -0.4% to a new record low of -0.5%, and announced it would restart bond purchases at a monthly pace of EUR 20 billion from November 1. Joining the ECB, Denmark’s central bank cut its key deposit rate to -0.75%, a record low for developed economies. The Danish 10-year government bond yield closed the month 12 basis points higher at -0.56%.

In the UK, 10-year gilt yields rose by just over a basis point to end September at 0.49%. The Bank of England decided to leave its monetary policy unchanged, keeping rates at 0.75%. Canada’s central bank adopted a similar approach and left its key rate at 1.75%, but signaled it was ready to adjust lower if necessary. After a somewhat volatile month, the yield on Canada’s 10-year benchmark note climbed 20 basis points to finish at 1.36%. The U.S. Treasury 10-year mid-yield also experienced volatility during the month, increasing by nearly 17 basis points to 1.67%. As per market expectations, the Federal Reserve cut the federal funds range by 25 basis points to 1.75-2.0%, the second cut in a row. 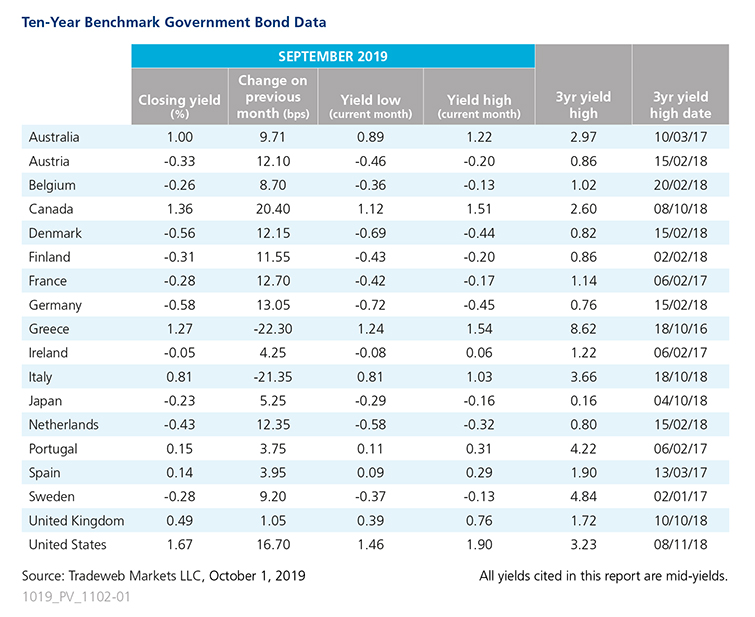