October was another eventful month in the world of government bonds. Yields on the majority of 10-year benchmark notes decreased, as markets continue to deal with inflation, geopolitical concerns and monetary policy tightening.

October’s greatest mover was the UK 10-year Gilt mid-yield, which ended the month 55 basis points lower at 3.52%, after closing at a 14-year high of 4.49% on October 10. Rishi Sunak was named leader of the Conservative Party and the next prime minister of the United Kingdom, after Liz Truss resigned on October 20. The Bank of England (BoE) ended its emergency bond purchasing program on October 14 and announced additional measures to support an orderly end of the purchase scheme in its last week of operation.

In the U.S., the Federal Open Market Committee (FOMC) meeting minutes from September were released on October 12, showing officials were surprised at the pace of inflation and expected higher interest rates to remain in place until prices decrease. The minutes also indicated inflation was being driven by supply chain problems and a shortage of labor. The U.S. 10-year Treasury note ended October with a yield of 4.08%, a 27-basis point increase from the month before.

Across the Atlantic, the European Central Bank (ECB) raised rates by 75 basis points on October 27. This marks the ECB’s third consecutive increase this year and takes the main benchmark rate from 0.75% to 1.5%. The ECB also announced it would be scaling back support for European banks as it changes the terms and conditions of its targeted longer-term refinancing operations, or TLTROs. Italy’s 10-year government bond closed the month 22 basis points lower, with a yield of 4.30%. In Germany, the 10-year Bund mid-yield gained 3 basis points from the month prior, ending with a 2.15% value for October. The country’s economy performed better than expected in the third quarter of 2022, growing 0.3%. However, inflation continues to cause concern, hitting 11.6%in October, up from September’s 10.9% level.

In the Asia Pacific region, the Bank of Japan met on October 28 and decided to maintain its dovish monetary policy, while also ramping up bond buying plans for next month. The Japanese 10-year government bond yield finished the month half a basis point lower at 0.24%. In Australia, inflation hit 7.3%, the highest level seen in the country since 1990. The 10-year note ended the month with a yield of 3.81%, a 5-basis point drop from September. 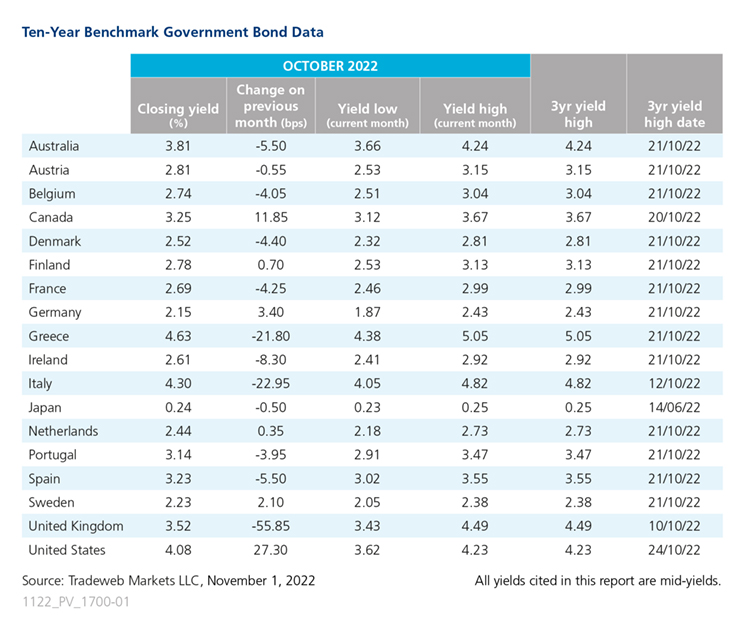