The bond market seesaw continues. Following April’s increases, yields for 10-year government bonds fell in May amid trade tensions, economic and monetary uncertainty, and political drama, with most sinking by double digits.

The U.S. Treasury 10-year mid-yield plunged by 36.5 basis points, trending down as the month went on, before closing at 2.14%. The country’s ongoing trade dispute with China and negotiations with Mexico continued in May, culminating with no agreements and the threat of increased tariffs on numerous goods. Towards the end of the month, minutes from the Federal Reserve’s latest policy meeting indicated a wait-and-see approach to interest rates.

In neighbouring Canada, the 10-year benchmark yield dropped by 22 basis points to end at 1.49%. Job growth figures announced by Statistics Canada in the middle of the month showed a gain of 106,500 in April, the largest one-month increase in the data going back to 1976.

Across the Atlantic, Germany’s 10-year Bund yield dipped 21 basis points to a new low of -0.20%. As in April, economic data sent mixed signals. A fall in domestic demand weighed down factory orders, which grew only 0.6% compared to expectations of a 1.5% increase; yet industrial output rose, climbing 0.5% month-over-month compared to an anticipated contraction of 0.5%. First-quarter economic growth clocked in at 0.4%, however, the Ifo Institute’s business climate indicator fell to 97.9 in May, the lowest since 2014.

Among the Euro area countries, the largest yield decline was seen in the Greek 10-year benchmark note, which dropped by 46 basis points to finish May at 2.72%. Only the yield on the Italian 10-year government bond bucked the trend, rising by 8 basis points to reach 2.65% at month end, amid an ongoing dispute between its government and the European Commission over public spending and deficits.

Elsewhere in Europe, 10-year Gilt yields saw a large decrease of nearly 29 basis points, closing the month at 0.89%. During May, the Bank of England voted unanimously to maintain its bank rate at 0.75%, while the British government made no progress on a Brexit deal. Following repeated attempts to secure passage of her Brexit plan through Parliament, Prime Minister Theresa May announced her resignation on May 24.

In the Asia-Pacific region, the yield on Australia’s 10-year note tumbled by 32 basis points to close at 1.48%. Despite an economy that appeared to be losing steam, the conservative government scored a surprise victory even though the polls predicted good results for the Labor party. Meanwhile, the Japanese 10-year bond mid-yield dipped further into negative territory by 5 basis points to close at -0.10% on May 31, as the Bank of Japan showed no signs of abating from its ultra-accommodative monetary policy. 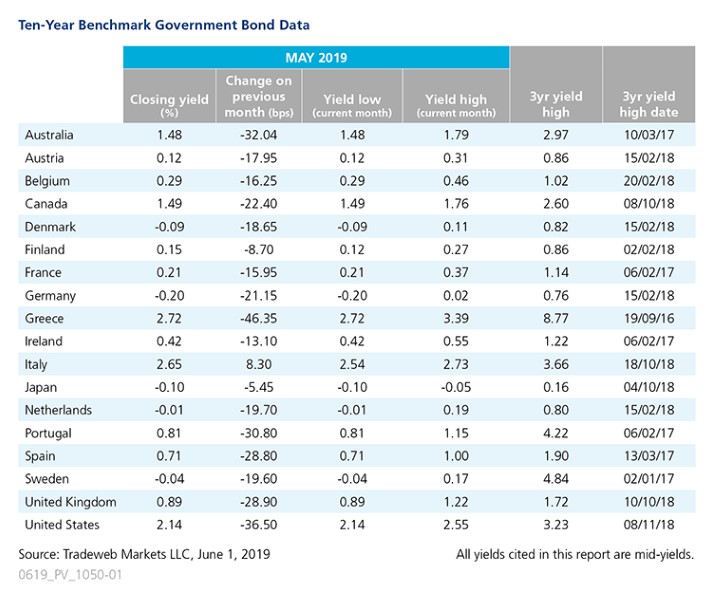