Global government bond yields ended the month lower in July as fears of an economic downturn have pushed some investors back into the sovereign debt market.

For policymakers, reigning in rising inflation continues to be top-of-mind and central banks globally are hiking interest rates as they try to slowdown the economy and curb increasing prices.

On July 13, the Bank of Canada (BoC) raised its key interest rate a full percentage point and signalled it would continue its policy of quantitative tightening (QT). The hike was the largest single rate increase since August 1998 and brings the BoC’s target overnight rate to 2.5%. The yield on Canada’s 10-year benchmark note was the second greatest mover in July, recording a 64-basis point drop and closing yield of 3.04%.

In the U.S., the Federal Open Market Committee (FOMC) met on July 27 and raised its benchmark interest rate by 0.75% for its second consecutive meeting and the fourth time this year. The Fed’s benchmark rate now sits at 2.25-2.50%. Inflation remains elevated, hitting 9.1%, the highest it’s been in four decades. The U.S. 10-year Treasury note ended the month with a closing yield of 2.64%, a 33-basis point drop from the previous month.

Across the Atlantic, the European Central Bank (ECB) also raised its three key interest rates by half a percentage point at its July 21 meeting in Frankfurt. This marks the ECB’s first increase in more than a decade and also brings the banks deposit rate from minus 0.5% to zero. The Governing Council also approved its Transmission Protection Instrument (TPI) programme, a new bond purchase scheme intended to help more indebted countries within the euro zone. According to the Governing Council, the TPI can be activated “to counter unwarranted, disorderly market dynamics that pose a serious threat to the transmission of monetary policy across the euro area.”

In Germany, the 10-year Bund mid-yield fell 60 basis points to close the month at 0.76%. Greece was the greatest mover this month as it dropped 68 basis points, ending the month with a 2.95% yield.

Italian bonds had a tumultuous July as Prime Minister Mario Draghi tendered his resignation on the same day the ECB raised interest rates. However, Italy’s 10-year note levelled off by the end of month, dropping 24 basis points for a final yield of 3.06%.

In the United Kingdom, geopolitical and economic concerns continue to impact markets. On July 7, Prime Minister Boris Johnson resigned after nearly 60 party members handed in their resignations. Data from the Office for National Statistics also showed that UK inflation hit a 40-year high of 9.4% as food and energy prices continue to soar. The 10-year Gilt fell 39 basis points, for a closing yield of 1.86%.

In Japan, members of the country’s central bank met on July 20 and 21, and decided to maintain its ultra-low interest rate policy. The Japanese 10-year government bond ended the month with a closing yield of 0.17%, an almost 5-basis point drop from the month prior. 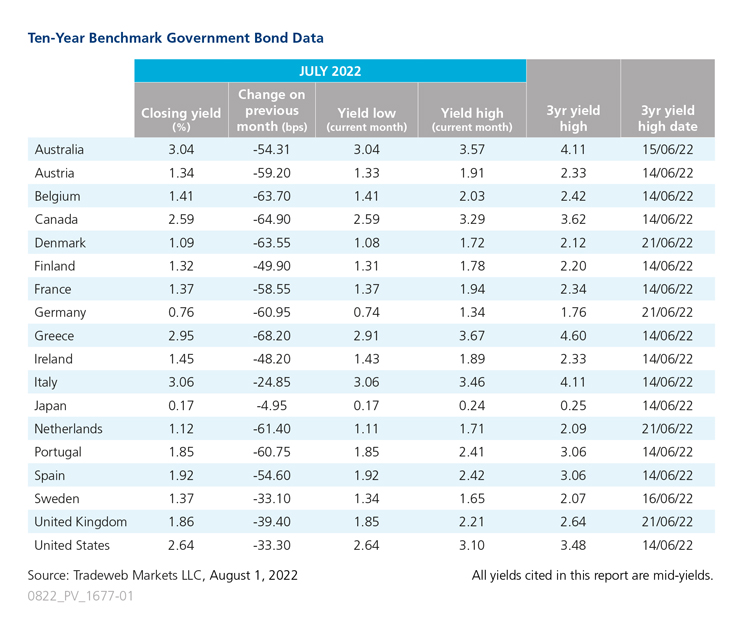