The New Year began like the previous one ended: 10-year government bonds rallied, with many of the securities tracked in the table below showing double-digit declines in mid-yields over the course of the month.

Meanwhile, yields on Portuguese and Spanish 10-year debt dropped by 24 and 22 basis points to end the month at 1.48% and 1.19%, respectively. Portugal completed one quarter of its target of €15.4 billion in total bond sales for 2019, selling €4 billion of bonds. The country also posted its biggest budget surplus since the adoption of the Euro. Spain sold a record €47 billion in 10-year debt, as 2018 GDP reports came in showing a slowdown to 2.5% compared to 3% in 2017.

Similarly, Italy’s 10-year benchmark yield dipped 15 basis points to 2.58% at month end. The country issued €10 billion in debt and received orders from investors for as much as €35 billion, amid ongoing political uncertainty.

On January 24, the ECB left rates unchanged and stated that they will remain at current levels at least through summer. Ending at a month low of 0.10%, 10-year Bund yields declined by 14 basis points during January. Federal Statistics Office data showed the German economy grew by only 1.5% last year, the slowest pace in five years.

In the U.S., movement in the 10-year Treasury yield was less pronounced, falling by 6 basis points to close at 2.63% on January 31. An initial release for employment growth showed a gain of 312,000 jobs, while the Federal Reserve left the range for the federal funds rate unchanged.

In the Asia-Pacific region, the yield on the Japanese 10-year note decreased by 0.15 basis points to 0%, as the Bank of Japan maintained its 0% 10-year yield policy. 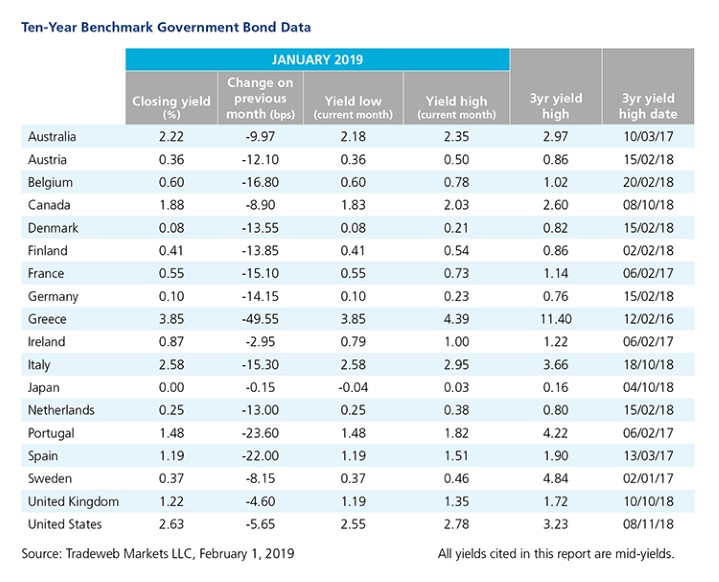