September brought another across-the-board increase in 10-year government bond yields amid a flurry of central bank rate decisions. Leading the way, the mid-yield on the UK 10-year Gilt rose by 31.5 basis points to close the month at 1.03%, its highest level since May 2019. At its meeting ending on September 22, the Bank of England’s Monetary Policy Committee (MPC) voted unanimously to maintain rates at 0.1%. However, the central bank’s governor, Andrew Bailey, said a few days later that MPC members saw a growing case for a Bank Rate increase.

The second-largest move of the month came from the Australian 10-year bond yield, which climbed 31 basis points to 1.51%. It was followed by its Canadian equivalent, rising 29.5 basis points to finish September also at 1.51%. The Westpac-Melbourne Institute Index of Consumer Sentiment increased by 2% to 106.2 in September from 104.1 in August largely due to the improving vaccine situation. In contrast, consumer confidence in Canada decreased to 52.98 points in September from 55.01 points in August.

Meanwhile, the U.S. 10-year Treasury yield ended the month 22.5 basis points higher at 1.53%. The Federal Open Market Committee decided to keep the target range for the federal funds rate at 0-0.25% and monthly asset purchases at USD 120 billion. The Committee said, however, that if the economy continues to make progress toward its maximum employment and price stability goals, then a moderation in the pace of bond buying may soon be warranted. The September ISM Manufacturing PMI registered 61.1%, up from the August reading of 59.9%, indicating an expansion in the overall economy for the 16th month in a row after contraction in April 2020.

In Europe, the yield on Sweden’s 10-year benchmark note climbed 22.5 basis points to 0.38%. The Riksbank’s Executive Board decided to hold the repo rate unchanged at 0%. At its September meeting, the European Central Bank kept the interest rate on the main refinancing operations and the interest rates on the marginal lending facility and the deposit facility unchanged at 0%, 0.25% and -0.50%, respectively. Germany’s 10-year Bund yield shifted up by 19 basis points during the month, but remained in negative territory at -0.19%. After narrowly winning the federal elections held on September 26, the Social Democratic Party of Germany (SPD) began negotiations to form a ruling coalition.

On September 3, Japan’s prime minister, Yoshihide Suga, announced his resignation after just one year in office amid criticism over his Covid-19 response and a significant drop in his approval ratings. His successor, Fumio Kishida, won the race to lead the country’s ruling Liberal Democratic Party (LDP) on September 29. The Bank of Japan left its interest rate target at -0.1% and its yield curve target for the 10-year government bond at around 0%. The benchmark note’s mid-yield increased by 4 basis points in September, pushing it further into positive territory at 0.06%. 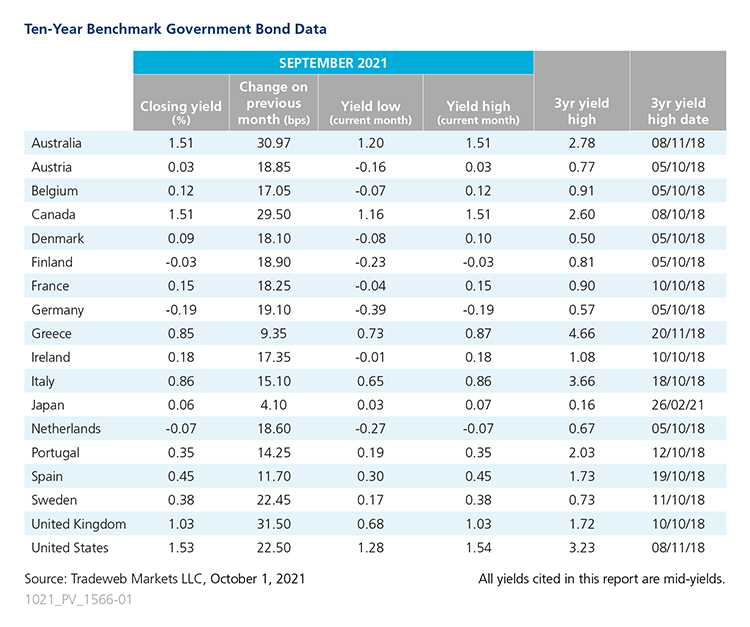