Ten-year government bond yields saw little volatility in May, with the largest move in either direction coming from France. The mid-yield on the country’s 10-year benchmark note shifted further into positive territory, ending the month nearly 11 basis points higher at 0.17%. Revised data from statistics agency, Insee, showed a decline in gross domestic product of 0.1% in the first quarter of 2021, mainly due to the inclusion of construction numbers. However, French business and consumer confidence rose by 12 points to 108 in May, the highest level since April 2018.

Despite seeing small increases during the month, Dutch and German 10-year government bond yields still finished in negative territory at -0.04% and -0.18%, respectively. While Germany’s economy contracted by 1.8% in the three months to March 2021, the Ifo Institute’s gauge of business expectations rose to 99.2 in May, beating market expectations of 98.2 and April’s revised figure of 96.6.

Elsewhere in Europe, the UK 10-year Gilt yield decreased by 5 basis points in May to close at 0.79%. Data from the Office of National Statistics showed that the country’s GDP had shrank by 1.5% in Q1 2021. This followed an earlier report from the Bank of England (BOE) forecasting that the country would see its strongest growth rate since World War II, as GDP returned to its pre-COVID level by the end of 2021. At its latest monetary policy meeting, the BOE left its bank rate at 0.1%.

Across the Atlantic, the Canadian 10-year bond yield fell by 6 basis points over the course of the month to 1.49%. Similarly, the U.S. 10-year Treasury yield dropped by nearly 4 basis points to 1.59%. A jobs report showed 559,000 gains in May, while the unemployment rate fell to 5.8%. Furthermore, the seasonally adjusted final IHS Markit US Services PMI Business Activity Index registered 70.4 in May, up from 64.7 in April and greater than the earlier released 'flash' estimate of 70.1.

In the Asia Pacific, the Reserve Bank of Australia (RBA) left its monetary policy unchanged, saying rates would remain at low levels until at least 2024, and upgraded its growth outlook for 2021 to 4.75%. The Australian 10-year mid-yield declined by over 6 basis points to 1.64%. Its Japanese equivalent remained in positive territory, even though it closed the month about a basis point lower at 0.08%. 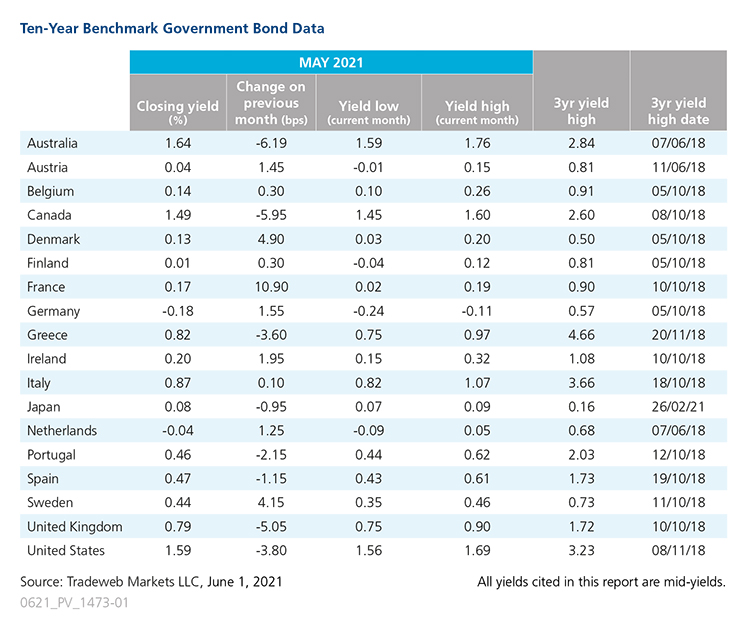