Ten-year government bond yields mostly fell in June, with those for Australia dropping by more than 16 basis points to 1.48%. The Westpac-Melbourne Institute Index of Consumer Sentiment fell 5.2% to 107.2 in June from 113.1 in May, amid concerns over the two-week lockdown in Melbourne and disappointment around the federal budget. In contrast, the Ai Group Australian Performance of Manufacturing Index rose to a record level of 63.2 from 61.8 in the previous month, its fifth consecutive increase.

The second biggest move came from the U.S. 10-year Treasury mid-yield, which ended June nearly 15 basis points lower at 1.44%, its lowest level since early March. Total nonfarm payroll employment increased by 850,00 during the month, well above market forecasts of 706,000 job gains. According to the Federal Reserve’s Beige Book report, the national economy expanded between early April and late May at a somewhat faster rate compared to the prior reporting period. At its latest meeting, the central bank kept the target range for the federal funds rate at 0-0.25%, but said that indicators of economic activity and employment had strengthened.

The Canadian 10-year bond yield also saw a double-digit decline of 10 basis points, finishing June at 1.39%. The Bank of Canada maintained its overnight rate at 0.25% and asset purchases at a target pace of CAD 3 billion per week, following a CAD 1 billion reduction in its previous meeting. The seasonally adjusted Ivey Purchasing Managers Index increased to 71.9 in June from 64.7 in May, while consumer confidence rose to 51.49 points in June from 48.63 in May.

At its June meeting, the European Central Bank left the interest rate on the main refinancing operations, and the interest rates on the marginal lending facility and the deposit facility unchanged at 0%, 0.25% and -0.5%, respectively. Euro area annual inflation is expected to be 1.9% in June, down from 2% in May. Germany’s 10-year Bund mid-yield dropped by more than 2 basis points to close the month at -0.21%. The country’s inflation rate, measured as the year-on-year change in the Consumer Price Index, is expected to be +2.3% in June. Bucking the trend, the Greek 10-year government bond yield ended the month more than 5 basis points higher at 0.82%. 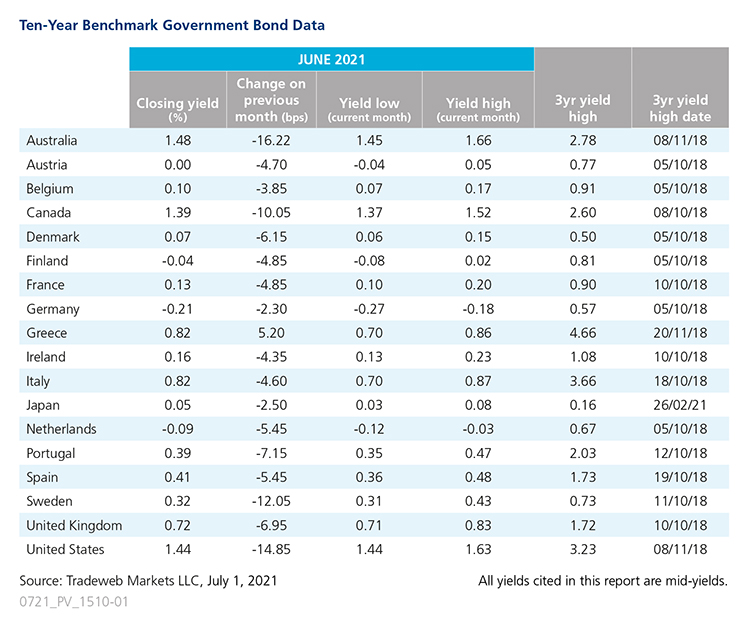