Ten-year government bond yields rose in July with the exception of those for Portuguese debt, as markets waited for more hints over monetary policy direction.

The Canadian 10-year government bond saw the month’s biggest move, with its mid-yield increasing by 14 basis points to close July at 2.31%. Statistics Canada reported a larger-than-expected payroll growth during June, with 31,800 new jobs added. Citing a strong labor market and on-target inflation figures, the Bank of Canada raised its benchmark interest rate to 1.50%, the fourth time it hiked rates since mid-2017.

Similarly, yields on the U.S. Treasury 10-year note rose 11 basis points to end July at 2.96%. The U.S. economy advanced an annualized 4.1% in the second quarter of 2018, its fastest pace since Q3 2014, despite lingering concerns about trade disputes with Canada, the European Union, and Asia.

In Europe, Germany’s 10-year Bund mid-yield climbed nearly 14 basis points to close the month at 0.44% against a backdrop of mixed economic news. An announcement that industrial production rebounded in May, rising 2.6% month on month, was offset by a gauge of business expectations from the Ifo Institute, which slipped to 98.2 in July, compared to 98.5 in June and 102.7 at the end of 2017.

In contrast to its Euro area counterparts, Portugal saw its 10-year benchmark bond yield decline by 5 basis points to 1.73%. Following its July 26 meeting, the ECB left monetary policy unchanged, with a base deposit rate of -0.4% and a quantitative easing program of €30 billion per month.

Elsewhere, Sweden’s 10-year bond mid-yield climbed almost 12 basis points to close at 0.60% on July 31. Riksbank, the country’s central bank, also kept rates steady at -0.5%, but maintained a forecast that it will kick off a cycle of cautious interest rate hikes toward the end of 2018.

Meanwhile, the yield on Japan’s 10-year government bond ended the month 2.5 basis points higher at 0.05%. The Bank of Japan said it would allow a wider range for the benchmark note, which could now move between -0.2% and 0.2%. In addition, BOJ governor Haruhiko Kuroda reaffirmed the central bank’s ultra-easy monetary policy, adding that he expected current rates to continue for an extended period of time. 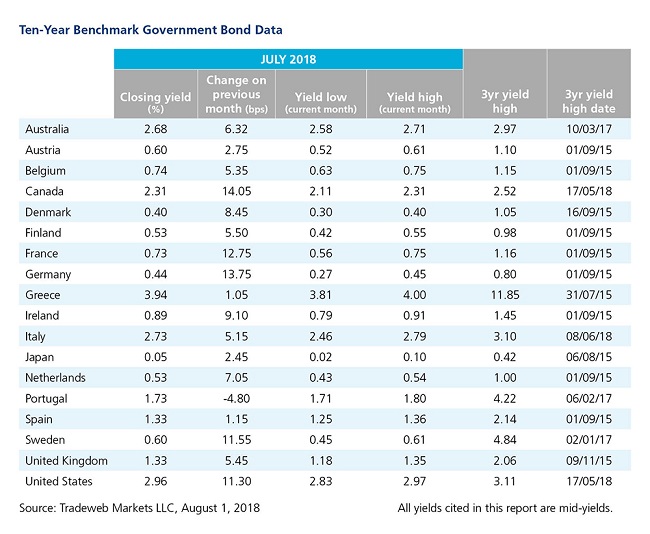