Global government bond yields surged in December amid a flurry of central bank decisions, speculation about the future direction of monetary policy, and slower economic growth. The International Monetary Fund’s Managing Director, Kristalina Georgieva, said her organization expects a third of the world to be in a recession in 2023, given the weakness in the biggest economies.

At its December meeting, the European Central Bank (ECB) raised rates by 50 basis points to bring the deposit rate to 2.00%. Multiple officials, including President Christine Lagarde, have said the central bank would continue to raise rates “significantly” further to tame current inflationary pressures. Ten-year government bond yields rose throughout Europe, with those for Italy climbing 76 basis points to end December at 4.64%. Recently-elected Prime Minister Giorgia Meloni expressed concern about the ECB’s ongoing tightening and the pressure it may put on her country’s finances.

Elsewhere in the Euro area, the mid-yield on France and Germany’s 10-year benchmark notes finished the month 65 and 58 basis points higher at 3.06% and 2.52%, respectively. France’s annual inflation rate slowed to 5.9% in December from 6.2% in November, according to a preliminary report from the French National Institute of Statistics and Economic Studies (INSEE). In Germany, the ifo Business Climate Index rose to 88.6 points in December, up from 86.4 points (seasonally adjusted) the month prior.

In the United Kingdom, 10-year Gilt yields climbed by nearly 50 basis points to end December at 3.66%. The Bank of England raised rates by 50 basis points to 3.50%, its ninth consecutive increase. Widespread disagreement on the size of the rate hike and the direction of inflation, coupled with the central bank’s view that the country was already in a recession, could signal a slower pace of rate rises in 2023. GfK’s Consumer Confidence Index rose to -42 in December, up from -44 in November and September’s figure of -49, the lowest point since the index began in 1974.

In the U.S., the yield on the 10-year Treasury went up by more than 13 basis points over the month to close at 3.83%. Similar to its central bank counterparts across the pond, the U.S. Federal Reserve raised rates by 50 basis points to bring the target range to 4.25-4.50%. Chair Jerome Powell emphasized that the Federal Open Market Committee “had more work to do” to bring down inflation, and “ongoing increases will be appropriate in order to attain a stance of monetary policy that is sufficiently restrictive to return inflation to 2% over time.”

Long a holdout among major central banks for its relatively accommodative monetary stance, the Bank of Japan (BOJ) surprised markets by changing its yield curve control policy, widening the band for the country’s 10-year benchmark bond yield to 50 basis points on either side of 0%. However, Governor Haruhiko Kuroda said the move should not be construed as tightening and that the yield target would remain. The BOJ also announced that monthly purchases of Japanese government bonds (JGBs) would increase to ¥9 trillion from a previous ¥7.3 trillion. The overnight interest rate remained unchanged at -0.1%. During the month, the 10-year JGB mid-yield surged by 16.50 basis points to 0.41%. 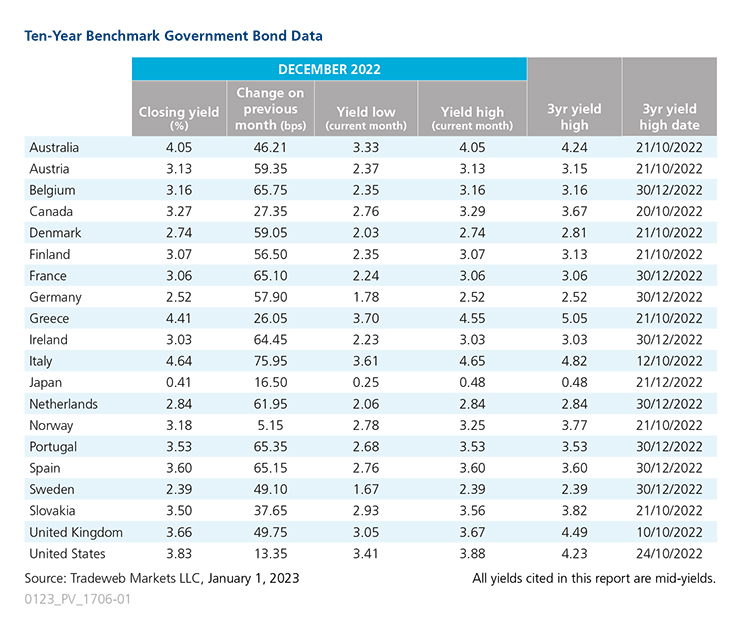