Institutional investors are increasingly relying on exchange-traded funds to gain access to a broad range of asset classes and investment objectives. In times of heightened market volatility, as in the weeks surrounding the recent US presidential election, ETFs can offer investors diversification of economic, currency and risk exposure.

Notional volume executed on the Tradeweb European-listed ETF marketplace significantly increased following Donald Trump’s surprise victory in November 2016. During the month, activity in equity-based ETFs amounted to 58% of the overall platform flow, with ‘buys’ narrowly beating ‘sells’. North America Equities was by far the most heavily-traded sector with nearly €2.5 billion in notional, of which 59% was ‘buys’. Emerging Markets Equities came second with traded volume amounting to just below €1.8 billion. The sector saw net selling with a ‘buy’ ratio of just 31% amid concerns over the impact of future U.S. policies on trade and immigration.

Overall, ‘sells’ in fixed income products outstripped ‘buys’ in November, as a proportion of the total traded volume. Emerging Markets, Corporate and High Yield bond ETFs were mostly offered with ‘buy’ ratios of 15%, 35% and 37% respectively. Government Bonds was the most popular fixed income category with more than €1.6 billion in traded notional.

However, analysis of platform activity in the first month of the new year reveals a reversal in investing patterns, as the markets began to digest the new political landscape. The post-US election shift into North American equity ETFs slowed down to a ‘buy’ ratio of 53%, after a high of 62% in December 2016. Europe Equities saw strong ‘buying’ of 65% in January - up from 44% in November - and was the most popular ETF category during the month with more than €3.2 billion in notional.

Emerging markets debt ETFs experienced the most pronounced change in January 2017, with a ‘buy’ ratio of 74%. Similarly, corporate and high yield bond ETFs were heavily bid, with ‘buy’ ratios of 60% and 78% respectively. Aggregate Bonds, which invest in both government and corporate debt securities, saw their volume increase to approximately EUR 630 million, up EUR 248 million compared to November.

Meanwhile, commodity-based ETFs also saw net buying in January, with ‘buys’ accounting for 69% of the volume executed in the asset class, which doesn’t tend to move in lockstep with stocks and bonds over the longer term. 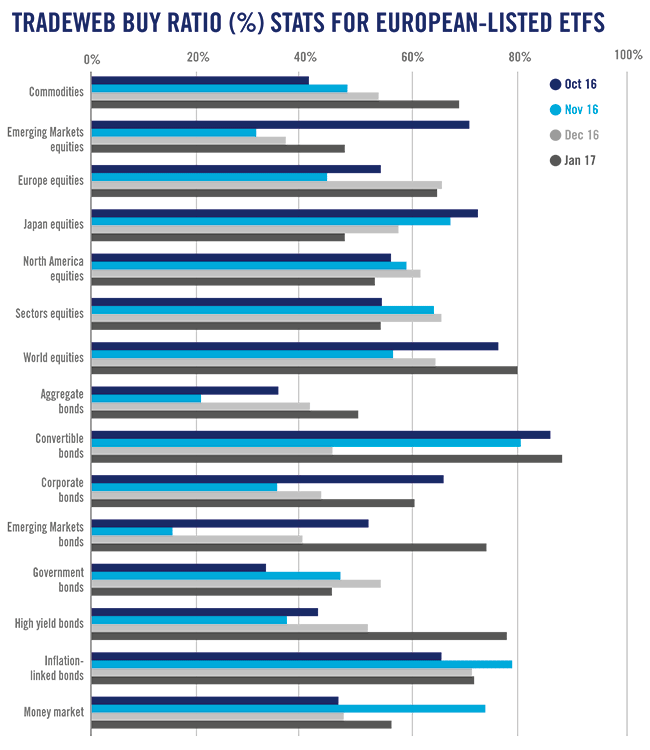