Tradeweb: A look back at 2020 for European Government Bonds

2020 has evidently been an interesting year and some unique trends occurred in the electronic marketplace for European government bonds as a result. No one could have ever anticipated or predicted a year quite like the one we've had, both the buy- and the sell-side have had to adapt quickly in order to successfully navigate these markets.

In this blog we take a look at the predominant themes and challenges we’ve seen in the European government bond market during these unprecedented times, including impacts on liquidity, as well as what tools and functionalities traders have been using to help navigate market volatility.

During the volatile market moves in March, the bid/offer spreads across all issuers widened significantly, with a large impact on the short end of the curve as one would expect. Yet in most cases, the spread actually came back relatively quickly to nearly pre-Covid-19 levels, especially in core countries such as Germany. 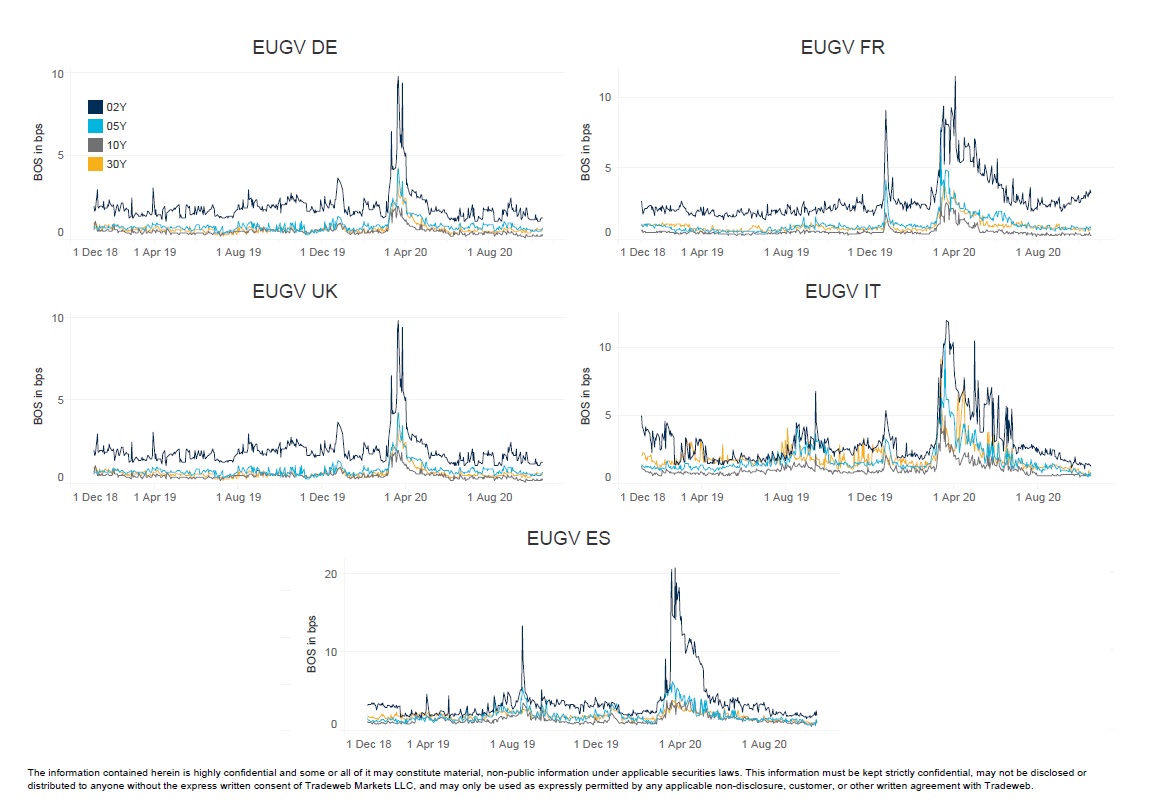 At the peak of volatility, during the second and third week of March, we initially saw a decline in hit rates in European government bonds, however, this was short lived and these were back above 70% (inquiries sent versus trades executed) from the last week of March onwards. Unsurprisingly, many market makers turned their algo pricing off during that two-week period, though it should be noted that some of the banks did actually manage to keep their algos on in the most liquid part of the curve, even during what was probably one of the most challenging times in recent years in terms of liquidity. Nonetheless, due to overall market turnover being heightened as a result of increased volatility, Tradeweb achieved new volume records with March 2020 being our largest month ever, up 40% when compared to March last year.

This volatile period forced traders to use all the tools in the tool box when executing a trade. The buy-side, for example, has been focussed on the access of pre-trade information to help them make decisions on their trades. This includes a variety of different datasets, including their historical performance of dealers by country maturity and axe information. It is interesting to note that axe functionalities are becoming increasingly popular in that they link pre-trade information with trade execution of European government bonds, corporate bonds, and exchange-traded funds (ETFs). As a result they are live, executable indications of a dealer's interest to buy or sell a specific instrument, in addition to the useful fact they can be viewed graphically as an aggregate. 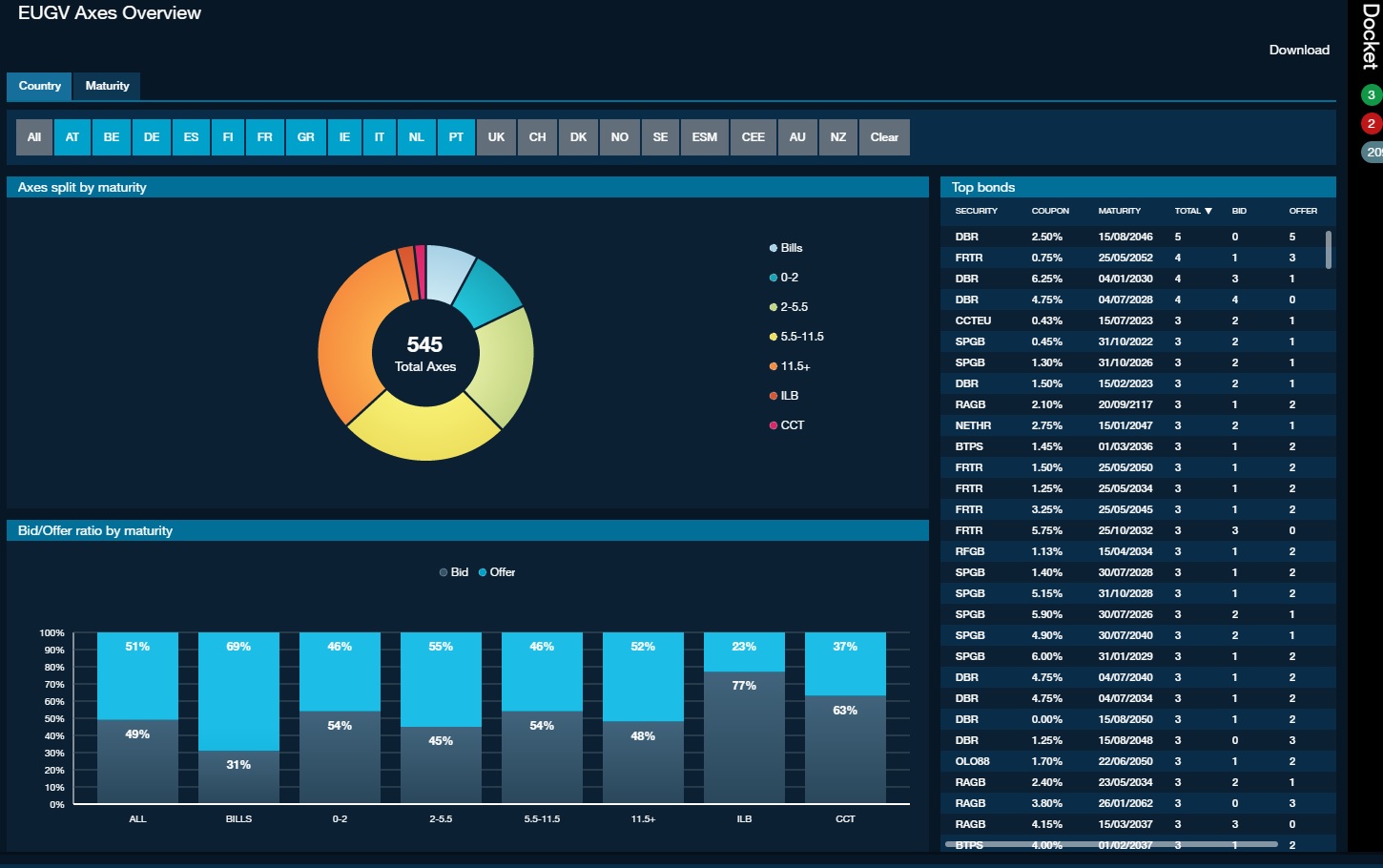 In terms of actual trading, the ability to automatically calculate spreads on switch tickets helped traders with dealer selection. Other list trading tools, such as Tradeweb’s SNAP, have helped non-continuous list trading by automatically selecting the best dealers across different securities based on tailored criteria, ensuring that liquidity is being sent to preferred providers. Further, given that almost 20% of gilts are now traded via the trade at close list, traders have been using the capability to send contingent lists to one dealer before 15:30 GMT that will then be priced at the close.

Once the bid/offer spread returned back to normal in April, traders were then more comfortable returning to automated trading tools that allow traders to build rules-based trading. As people became more accustomed to working from home, traders started to execute larger sizes, and across more products.  In Q3/Q4, we saw significantly more automation than we did pre-Covid – and we are now executing more than 50% of the EUGV tickets via our Automated Intelligent Execution (AiEX) tool.

What innovation does the buy-side want next?

We’ve been hearing from our clients that there is room for innovation on an even further number of trading protocols. For example, two-way pricing in gilts and euros (which helps minimise footprint and not show intended direction). For those clients interested in speed of execution, a firm pricing protocol is being developed which allows traders to select a valid streaming price, providing certainty and speed of execution, as well as limited information leakage. Fast-money traders have indicated that they would like the ability to trade Bond Basis as packages of futures vs. deliverable bonds in DE, IT, ES and Gilts. In addition to offerings already extended to Cyprus government bonds and Scandinavian treasury bills, we will be supporting the ability to trade bonds in grey markets. Last but not least, instrument coverage will also cover ascending green bonds which are currently certified on the Euro platform by the climate bond initiatives.

There has been recent growth in electronic trading platforms resulting from both market turnover due to increased volatility, and an overall continued increase in levels of electrification in general. When dealing with extraordinary events, traders need an even broader array of tools to help them navigate markets, of which the protocols and tools found within an electronic trading platform provide. The exciting development of these new functionalities can only stand to serve traders in uncharted waters ahead.