SEF 101 - Understanding the Role of a Swap Execution Facility (SEF)

The era of mandatory trading of derivatives on swap execution facilities (SEFs) for U.S. persons is officially here. But what does that really mean?

We’ve been quick to update readers on the latest derivatives reform news such as the Made Available to Trade (MAT) certifications or swap data reporting requirements. However, it’s been a while since we’ve taken a step back to provide a high-level primer on SEFs for those who haven’t been mired in the minutia for the last few years of derivatives reform.

So, in the spirit of catching everyone up on the present state of play, we’ve pulled together a deep-dive into SEFs to help market participants understand the new derivatives trading landscape.

Here’s where it all started: In an effort to better regulate derivatives trading, legislative bodies in the U.S. and Europe have implemented a series of financial reform initiatives to achieve three key objectives for the OTC derivatives markets:

In the U.S., the bulk of these reform initiatives were embedded in the Dodd-Frank Act and implemented primarily by the Commodity Futures Trading Commission (CFTC), working in conjunction with the Securities Exchange Commission (SEC). In Europe, the regulatory landscape is a bit more fragmented as the majority of derivatives reforms are addressed in the Markets in Financial Instruments Directive (MiFID) and European Market Infrastructure Regulation (EMIR).

Most major derivatives reform deadlines have been met in the U.S., but the process of rule implementation and enforcement is still unfolding in Europe. However, starting on February 12, 2014 all European-based entities trading derivatives including IRS, CDS and equity derivatives were required to begin reporting their transactions to a trade repository under EMIR.

Despite ongoing uncertainty with many derivatives reform details, starting on February 15, 2014, interest rate swaps that have been certified as MAT were officially required to trade on SEFs.  On Feb. 26, CDS contracts were subject to the same MAT requirement.

Doing it the Old Fashioned Way

Over-the-counter (OTC) or "privately negotiated" derivatives were historically traded over the telephone, but in more recent years, they began shifting to electronic markets such as Tradeweb. Multi dealer-to-customer, or competitive electronic trading of interest rate and credit default swaps (CDS) began in 2005, when Tradeweb launched its U.S. dollar and Euro-denominated electronic platforms.

In addition, there are two traditional sectors of the IRS and CDS markets: institutional dealer-to-client (D2C) and inter-dealer (D2D), with the D2C marketplace hosting a larger number of participants than D2D.

The D2C electronic trading is expected to maintain its continued growth as market participants continue to move their trading businesses toward electronic venues. They’ve been hard at work to achieve greater efficiency in their trading, in a more transparent way that also complies with regulatory mandates.

A central component in this fully electronic workflow was the mandate that all exchange-traded and some OTC-traded derivatives contracts be centrally cleared - the process through which financial transactions are cleared by a single (central) counterparty to reduce individual risk.

Central clearing of derivatives reduces fragmented counterparty risk and strengthens overall market integrity. It also helps with segregation of different positions and portability in the event of a default, improves transparency for regulatory compliance, and benefits the central management of trade lifecycle events.

Before a trade can be executed on a SEF, however, it must have “certainty of clearing.” This means that even before a trade is initiated, both parties to the trade and the clearinghouse assure that the trade will clear through a futures commission merchant (FCM). In a centrally cleared environment, institutional investors need a clearing member to extend credit in order for their trade to clear. There are several paths to achieving this certainty of clearing, all of which require some type of pre-trade credit-check to ensure that clearing members will extend sufficient credit.  At present, this pre-trade credit-check procedure can occur at the clearinghouse, through an industry vendor or hub, or at a SEF, where the trades are actually executed.

The Tradeweb pre-trade credit-check mechanism is a SEF-based hybrid solution designed to work seamlessly in the current derivatives trading workflow (see Figure 1). To further align with a regulatory shift and the needs of the marketplace, Tradeweb developed electronic links to all major derivatives clearing houses, allowing institutional clients to automate their workflow throughout the trading process - from trade execution through clearing. Institutions are now able to better manage operational, systemic, and market risk. To date, derivatives trades conducted on the Tradeweb platform can be cleared through direct-integration with a variety of vendors, including IDCG, ICE Trust, ICE Europe via ICE Link, CME and LCH. 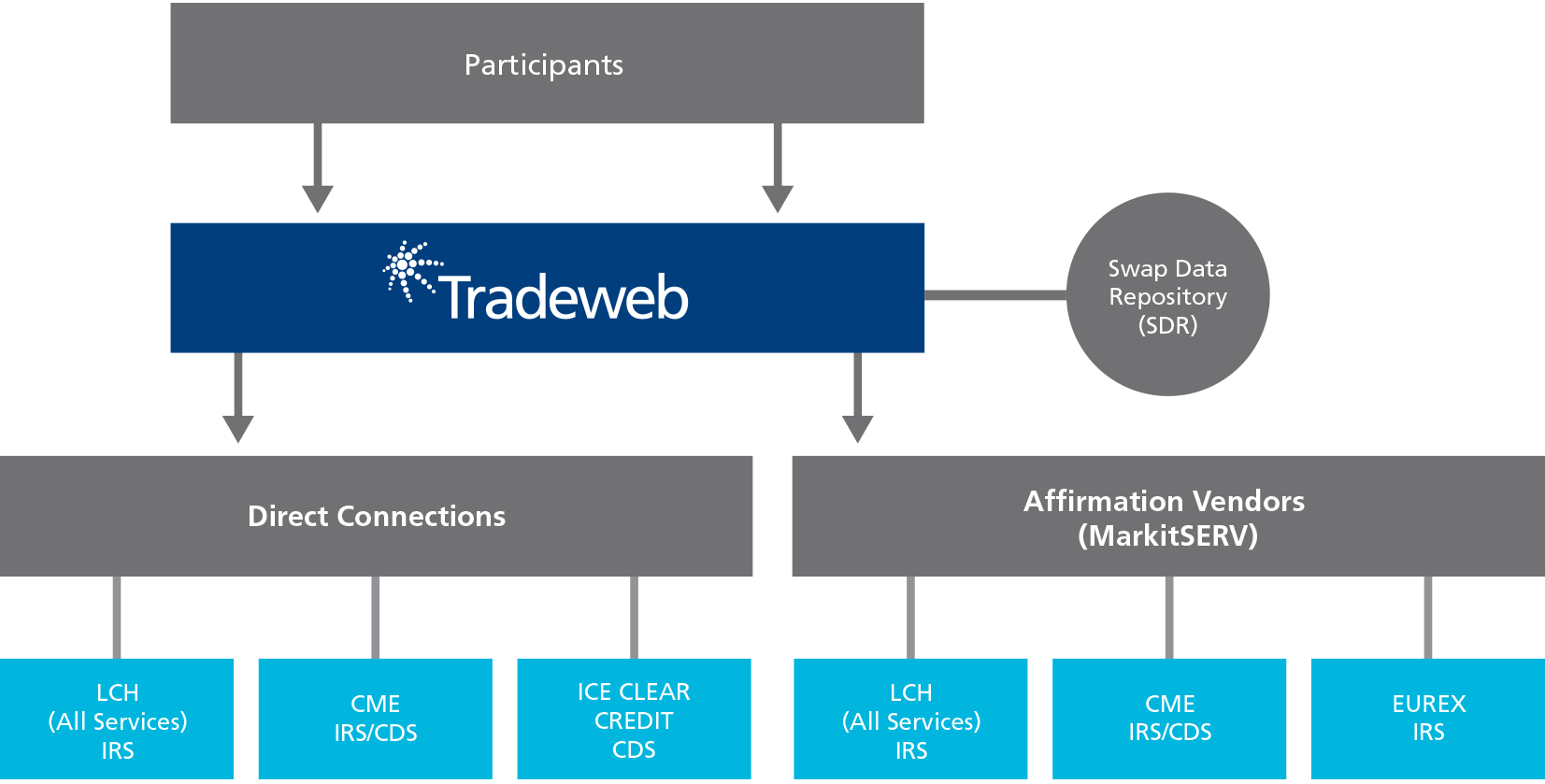 The industry has been making a gradual shift to electronic trading for nearly a decade.  Even before SEFs were mandated, market participants came to recognize that whatever advantage they might lose at the hands of new regulations, they could more than compensate for with efficiency by trading derivatives on electronic platforms. For example, to date, more than $14 trillion in notional swaps volume, representing more than 175,000 trades, has been traded by clients on Tradeweb.

The CFTC continues to work with the Securities Exchange Commission (SEC) and financial regulators abroad to drive harmonization and implementation of reform in the global derivatives markets.

While the impact of regulation on electronic swaps trading volumes has been felt by platforms, overall liquidity is expected to grow on SEFs as market participants increasingly embrace the enhanced efficiency and transparency that are enabled in a SEF trading environment in the U.S. p

For information on trading on a SEF, contact Tradeweb.