Record Volumes on SEFs in September and October 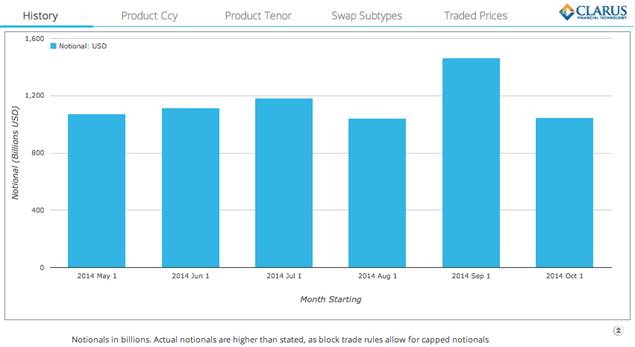 A factor to consider in the volumes is the level of Swaps Compression activity. If you read my blog on Swaps Compression, you will know that trueEX and Tradeweb are the two SEFs that perform the bulk of this SEF activity.

Lets use SEFView to look just at the volumes reported by these.

We know that all the trueEX (SEF) volume is compression, so this figure is $16.75 billion in September.

As we are not aware of other SEF compression activity in September, this gives a grand total of $108 billion or $0.1 trillion.

A small fraction of the $1.59 trillion September volume.

Some folks believe that compression activity should be excluded from trading volumes. However as this activity requires new trades to be executed that offset existing trades and as such a transfer of risk between two parties takes place, I believe they should be included in trade activity volumes. And even if we were to exclude, it does not make a material difference to volume trends.

Lets now look at the Off SEF volumes for the same period. 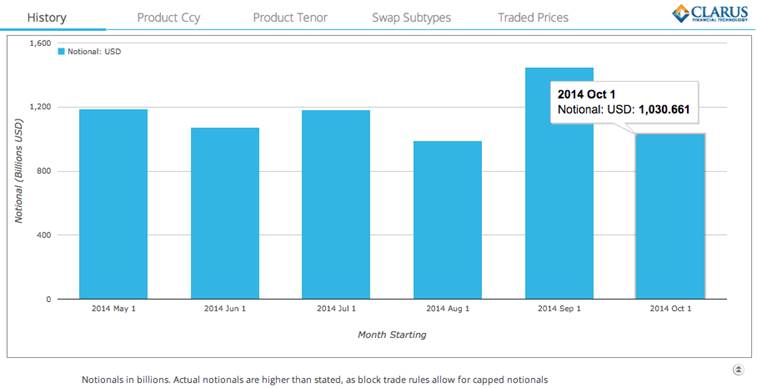 Which shows exactly the same trend as On SEF and comparable record volumes in September and October.

Comparing On SEF and Off SEF for October data. 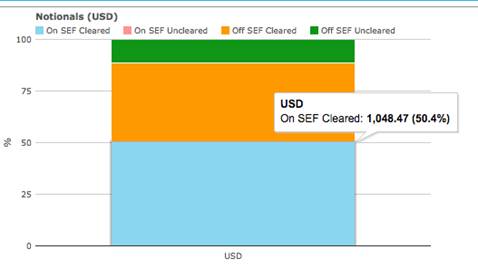 And breaking these down further, just for the week of Oct 13-17. 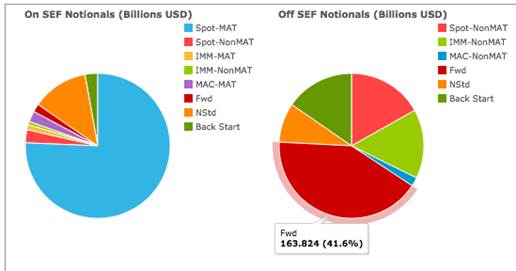 A reason given in the press for higher volumes is the return of market volatility. Using SDRFix we can determine the change in prices that has taken place in October.

Which shows massive moves of down 30 basis points across much of the curve. Plotting daily 11am EST prices from 1 May to 20 October 2014.

So clearly much higher price volatility in September and October than earlier months.

And what of SEF market share in USD IRS Fixed vs Float? Lets use SEFView to show the share in 5Y Swap Equivalent for the months of Sep and October to date.

So not too different to the chart I produced in June, see the last chart in the Six Month Review blog here. Only changes of note are that Tradition’s share is up 3% and Tullets down 4%.

September was a record month for USD IRS volumes both On SEF and Off SEF. $1.6 trillion of USD Swaps were traded in September.

October is on track to have even higher volumes.

Compression activity represented $108 billion or 6% of total volume in September. Off SEF Cleared Volumes were 38% of the total in October to date.

Forwards were the bulk (42%) of these, followed by Non-MAT Spot tenors and Non-MAT IMM.

Market volatility hit a high for the year with Swap prices dropping 30 basis points in the first 3 weeks of October.

SEF Market Share was similar to June, with Bloomberg leading and Tradeweb next. Slight change in IDBs with IGDL flat, Tradition up, Tullets down.

It will be interesting to see how the remainder of October play outs. And whether the higher volatility and higher volumes continue into November and December.

We live in uncertain times.