Investor fears over continuing geopolitical tensions and the sustainability of economic recovery have been mounting up in the second half of 2014.

Meanwhile, the capital markets chief of the Bank of International Settlements, Guy Debelle, warned last Wednesday of a “violent” reversal of global markets. In addition, the impending end of the Federal Reserve’s stimulus program, as well as Greece’s plans to exit its bailout without a precautionary line have further fuelled investor concerns.

Last week, in particular, saw volatility spike, affecting bond prices across the board. The German 10-year Bund bid-yield dipped to its lowest level on the Tradeweb European government bond platform on October 15, closing at 0.77%. On the same day, the U.S. 10-year Treasury bid-yield closed at 2.03%, 28 basis points down from the previous week-end; its UK Gilt equivalent dropped below 2%. The bid-yields on the Finnish and the Dutch 10-year benchmark bonds fell below 1% on October 14, and stayed there at market close for two and three days respectively. 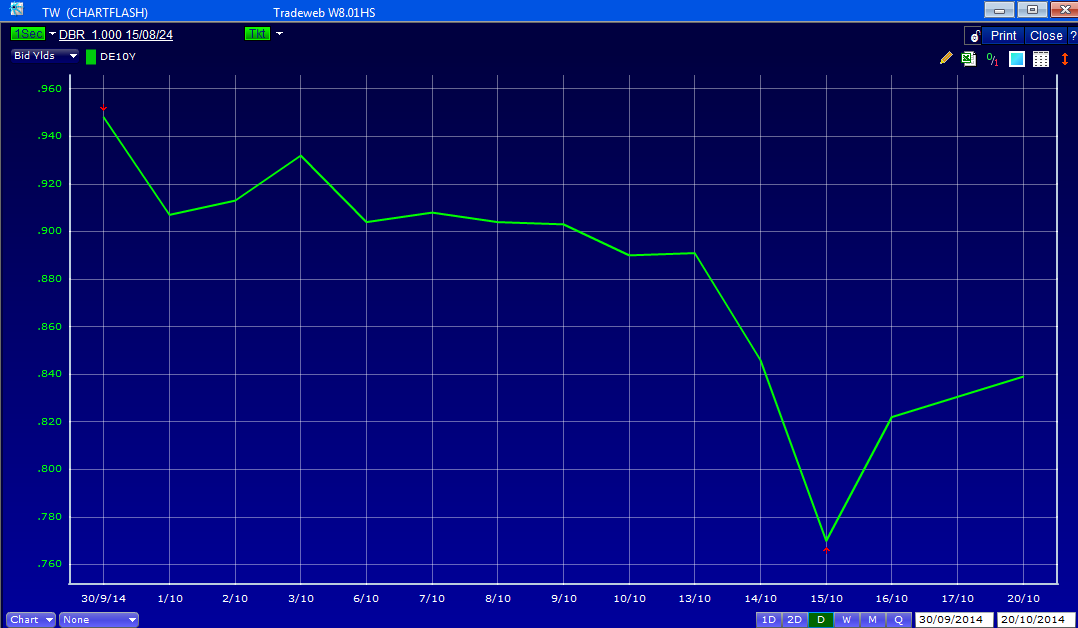 In contrast, yields on European peripheral debt rose during the week, with Greek bonds suffering the most: the bid-yield on the 10-year benchmark bond increased by 237 bps from the previous week-end to close at 8.95% on October 16, before settling back to 7.97% when the markets opened this morning. The bid spread against its German counterpart widened to 781 bps on October 16, but was 86 bps tighter this morning.