Last month, the yields of several European ten-year benchmark bonds reached their lowest levels since the launch of the Tradeweb European government bond platform in October 2000. This was true for both peripheral and developed debt markets.

France also saw its ten-year benchmark bond mid-yield fall to its lowest level at 1.4 per cent on Tradeweb. This represents a decrease of 96 bps year to date, 183 bps over three years and 223 bps over five years to July 29.

It was a record-breaking month for some of Europe’s periphery debt markets too. Irish, Italian and Spanish ten-year benchmark bond mid-yields dipped to 2.16, 2.65 and 2.47 per cent respectively on July 29. Over a three-year period, the Irish yield recorded the biggest drop (849 bps) – while the Italian and Spanish yields fell by 321 and 360 bps respectively. 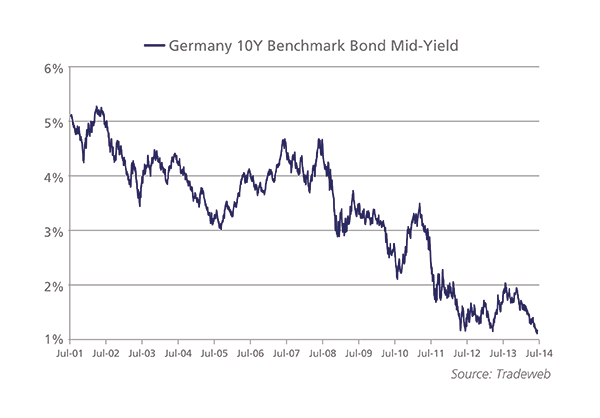