Revised GDP growth data showed that Japan’s economy had contracted by an annualised 1.2% in the second quarter of 2015, instead of the 1.6% reported previously. The Bank of Japan voted on September 15 to maintain its asset purchases at an annual pace of approximately 80 trillion yen. A day later, Standard & Poor’s announced that it had lowered Japan’s credit rating to A+ from AA- amid concerns over the government’s economic revival strategy.

Prime minister Shinzo Abe, who was re-elected as leader of the ruling Liberal Democratic Party on September 24, said that his Abenomics program was entering its second stage and pledged to increase Japan’s GDP to 600 trillion yen. Meanwhile, the country’s inflation rate was recorded at 0.2% in August, according to data released by the Statistics Bureau of Japan on September 25.

Japanese government bonds continued to rally in September, with the exception of two-year debt. The mid-yield on the benchmark 10-year and 40-year bonds ended the month lower by 3.2 and 3.85 basis points respectively. In contrast, the two-year benchmark bond mid-yield closed at 0.01% on September 30, 0.8 basis points higher from the previous month end. 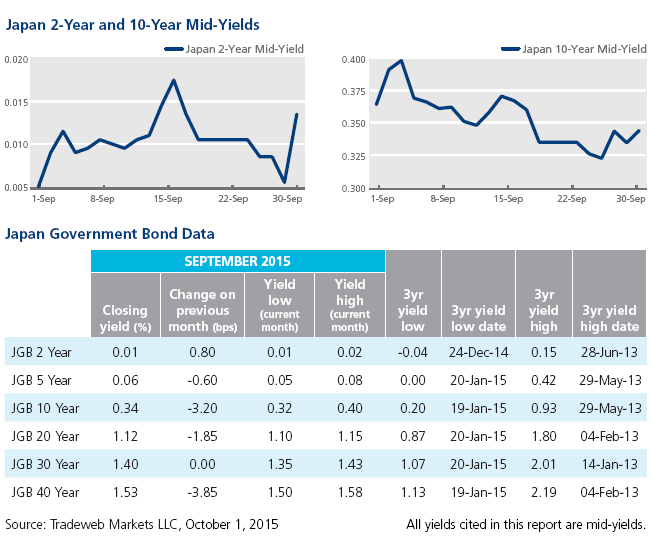