Japan’s GDP contracted at an annual rate of 0.8% in the third quarter of 2015, according to preliminary data published by the Cabinet Office on November 16. Quarter-on-quarter, the economy shrank by an estimated 0.2%. However, revised figures released in December showed a Q3 GDP expansion of 1% on an annualised basis and 0.3% on a quarterly basis.

On November 19, the Bank of Japan announced that it had decided by an 8-1 majority vote to maintain the pace of its monetary stimulus. Meanwhile, the country’s Statistics Bureau reported on November 27 that the jobless rate had dropped to 3.1% in October, its lowest level since July 1995.

Japanese government bonds had a mixed month in November, with mid-yields on 30- and 40-year debt ending the month higher by 3.25 and 3.55 basis points respectively. In contrast, 2-, 5- and 20-year benchmark bonds rallied during the month: the 2-year JGB mid-yield closed at -0.01% on November 30, nearly 1 basis point lower than the previous month end. 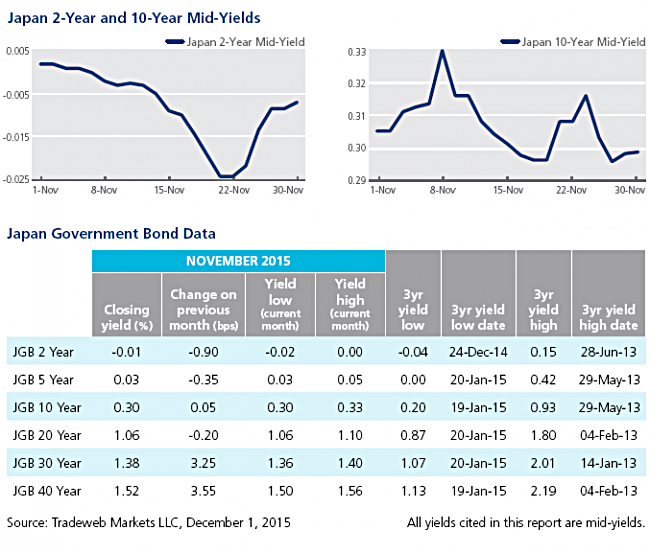