Japan became only the second country after Switzerland to issue 10-year benchmark bonds at a negative interest rate, with an auction for ¥2.2 trillion government paper at an average yield of -0.024% on March 1.

Following the conclusion of its two-day monetary policy meeting on March 15, the Bank of Japan held interest rates at -0.1% and kept asset purchases at ¥80 trillion per year. A day later, BoJ Governor Haruhiko Kuroda said in parliament that there was room to cut interest rates further to -0.5%. According to Japan’s Statistics Bureau, consumer prices in February increased by 0.1% month on month and by 0.3% over the year.

Yields on longer-dated Japanese government debt dropped to record lows in March. The mid-yield on the 20-year benchmark note declined to 0.32% at market close on March 8, while its 10-year equivalent closed at -0.10% on March 18. Mid-yields on 30- and 40-year JGBs fell to their historical lows on March 22, closing at 0.41% and 0.45% respectively. 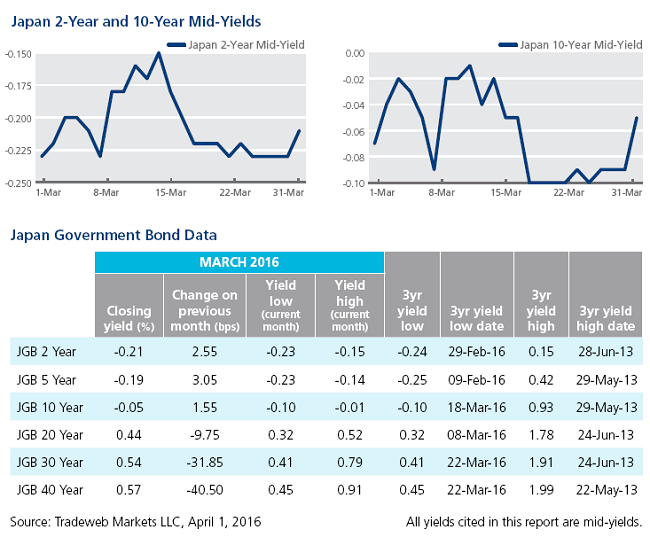