At the end of its two-day monetary policy meeting on July 29, the Bank of Japan announced a series of additional stimulus measures, but kept interest rates unchanged. Two days earlier, prime minister Shinzo Abe had outlined a new fiscal package exceeding ¥28 trillion aimed at boosting the economy. Mr. Abe ordered his government to draw up the spending plan after his ruling coalition’s victory in Japan’s upper house election on July 10.

Consumer prices in Japan dropped by an annualised 0.4% in June, the fourth consecutive month of decline, the country’s Statistics Bureau reported on July 29. During the same month, however, the unemployment rate fell to 3.1%, its lowest level since July 1995.

Japanese government bond yields continued to test new lows in July, before reversing with a sharp sell-off at the end of the month. The 10-year JGB mid-yield closed the month at -0.17%, up 12 basis points from the -0.29% low reached on July 8. At the short end of the curve, the mid-yield on the 2-year JGB ended the month five basis points higher at -0.25%. 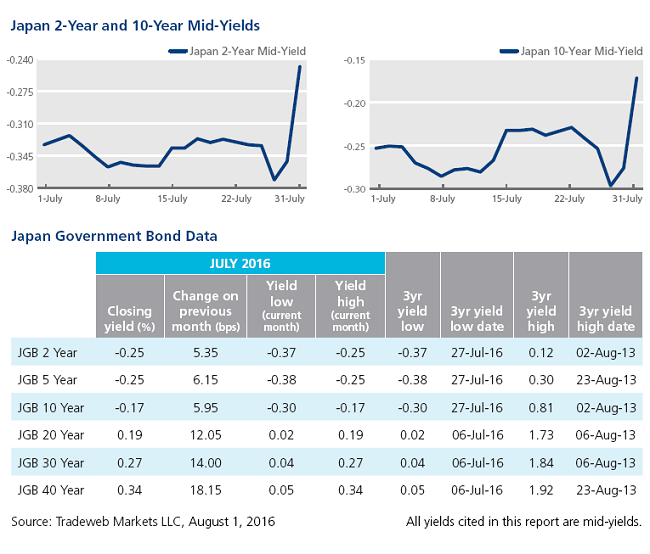