In a surprise move, the Bank of Japan introduced a negative interest rate by a 5-4 majority vote on January 29. The -0.1% rate will apply to current accounts held by financial institutions at the bank, and will be part of a three-tier system effective from February 16, 2016.

This is the second time a major central bank has cut interest rates into negative territory, after the European Central bank first adopted the policy measure in 2014. The BoJ kept asset purchases unchanged; however, governor Haruhiko Kuroda said that the bank was prepared to expand its accommodative monetary policy further if necessary. According to a preliminary estimate by Japan’s Statistics Bureau, consumer prices in the country rose 0.2% year-on-year in December, easing from November’s 0.3% increase.

Yields on Japanese debt dropped to record lows - since Tradeweb began tracking the data in 2008 - across tenures. Mid-yields on the 2- and 5-year JGBs finished January at -0.07% and -0.05% respectively, while their 10-year counterpart dropped 16 basis points on the previous month end to close at 0.11%. 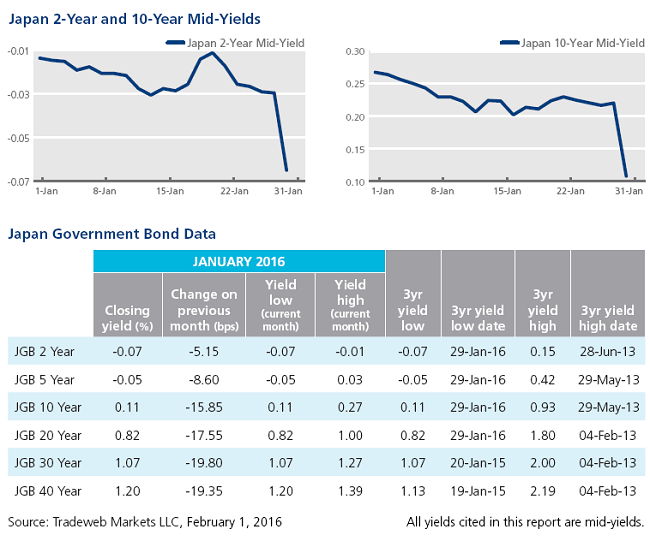