With political developments in Ukraine capturing the world's attention over the last few weeks, the slow but consistent rally of Greek debt didn’t make the headlines until today, when the country’s ten-year government bond mid-yield dropped below 7%, reaching an intraday low of 6.97%. The last time Greek ten-year bonds traded at these levels was on April 13 2010, according to data derived from the Tradeweb European government bond marketplace. This was shortly before a 110bn-euro bailout package to rescue Greece was agreed between eurozone members and the International Monetary Fund (IMF).

Earlier today, Reuters reported that the country's troika of international lenders (IMF, European Commission and European Central Bank) had accepted a lower capital ratio of 8% to be used in a second stress test of major Greek banks, rather than the 9% ratio they originally wanted.

Greece sold 1.3bn euros of three-month Treasury bills on February 11 to roll over a maturing issue, according to its debt agency PDMA. After losing access to long-term debt markets in 2010, the country has been relying on regular Treasury bill auctions for funding. Greek finance minister, Yiannis Stournaras, hinted in December at a more comprehensive return to the markets in the second half of 2014, depending on the state of the economy. 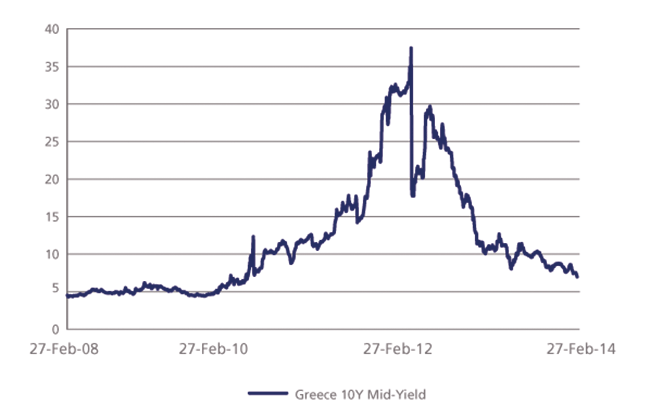