Volatility in U.S. Treasury trading and the Federal Reserve’s decision to raise the federal funds target range by 25 basis points to 2.25-2.50% made headlines in December. Yields on 10-year U.S. Treasuries posted the steepest month-to-month decline in two and a half years, falling by 32 basis points to close at 2.69% on December 31. This move occurred after a 3-year high of 3.23% in early November.

Canada’s government bond market experienced similar swings, with the country’s 10-year benchmark bond yield dropping 30 basis points to finish the month at 1.97%. Unlike its U.S. counterpart, the Bank of Canada left its benchmark rate unchanged at 1.75% at its early December meeting.

On the other side of the Atlantic, the yield on Italy’s 10-year note plunged 47 basis points to 2.74%, after reached a high of 3.18% early in the month. Months-long budget negotiations between Italy’s government and the European Commission came to an end towards the end of December, with a 2019 budget deficit of 2.04% compared to the 2.4% originally sought.

In Portugal, the country’s 10-year benchmark bond yield ended the month 10 basis points lower at 1.71%. Prime Minister Antonio Costa announced another early payment towards an International Monetary Fund loan, but a week after, the Bank of Portugal downgraded its 2018 and 2019 growth forecasts amid slowing exports.

Elsewhere in Europe, government bond yields exhibited less volatility, with those for the UK and Germany’s 10-year notes dropping by 8 and 6 basis points to close the month at 1.27% and 0.24%, respectively. Political uncertainty around Brexit showed no signs of abating as the March 29 deadline approaches. At its December meeting, the European Central Bank left rates unchanged and announced the end of its bond buying program, even as it trimmed forecasts for growth and inflation in 2019.

In the Asia-Pacific rim, both the Reserve Bank of Australia and the Bank of Japan maintained interest rates. For Japan, this means that it is now entering the third year of negative rates. Over the course of the month, the Australian 10-year bond yield declined by 26 basis points to 2.32%, while its Japanese equivalent finished 8 basis points lower at 0%. 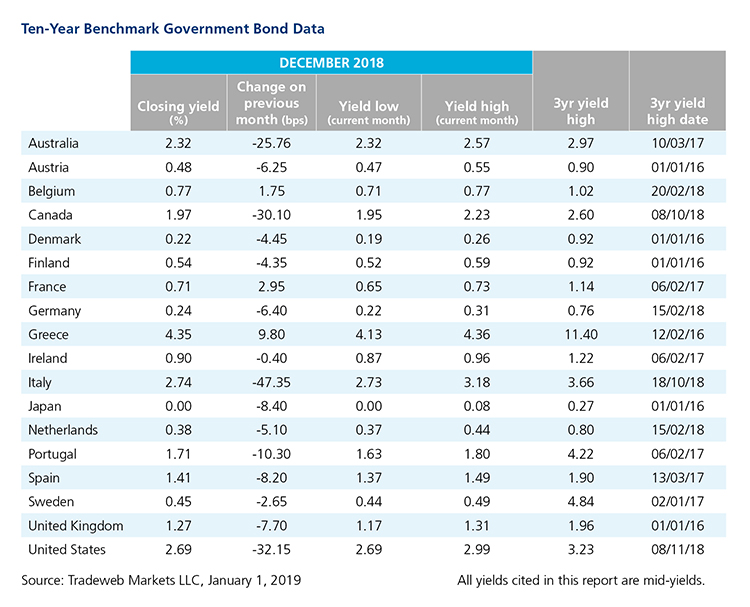