September proved to be another mixed month for global government bond markets amid ongoing political and monetary uncertainty. Yields on 10-year benchmark notes dropped to new record lows across several European countries, including two of the continent’s peripheral economies. According to Tradeweb data, Spain’s 10-year government bond mid-yield ended the month at 0.88%, while its Irish counterpart closed at 0.32% on September 28. On the same day, mid-yields on 10-year government debt in France and the Netherlands fell to 0.09% and -0.04% respectively, their lowest closing levels on record.

Earlier in the month, the European Central Bank decided to keep interest rates and its monetary stimulus programme unchanged. Consumer prices in the Euro area were expected to increase by an annualised 0.4% in September, the highest inflation rate since October 2014, following a 0.2% growth in the preceding month. Similarly, German inflation hit a 16-month high of 0.7% in September, as the cost of food and services continued to increase. The 10-year Bund mid-yield fell 5 basis points during the month to close at -0.12%, having risen to 0.04% on September 13.

In contrast, the mid-yield on the Greek and Portuguese 10-year benchmark bonds climbed 27 and 28 basis points during the month, closing at 8.43% and 3.31% respectively. The UK 10-year Gilt mid-yield also ended the month 23 basis points higher at 0.76%. On September 15, the Bank of England decided to maintain interest rates at the historic low of 0.25%, citing improving economic forecasts and business confidence. In addition, the central bank outlined the economic factors that could potentially lead to a further rate cut later this year.

Elsewhere, the U.S. Federal Reserve opted to wait for “further evidence of continued progress toward its objectives,” before increasing interest rates further. The 10-year Treasury mid-yield finished the month at 1.61%, up 4 basis points since the end of August. Meanwhile, the Bank of Japan announced it would adjust the pace of its bond buying to keep the 10-year JGB yield at “current levels around 0%.” The mid-yield on the security dropped one basis point over the month to close at -0.08%. 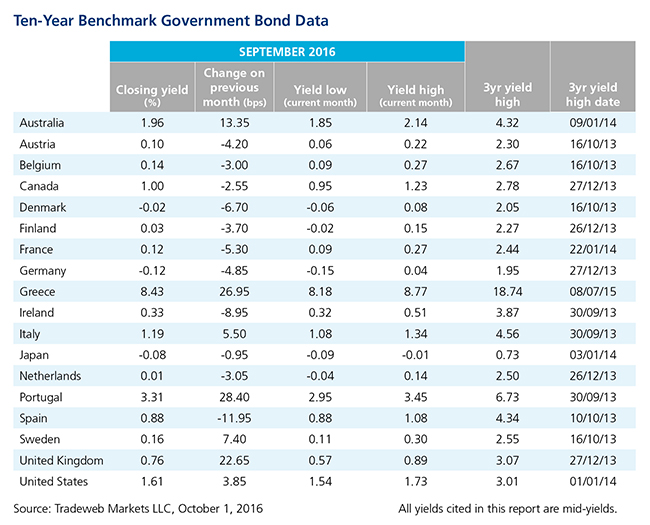