Government bonds suffered a sell-off in October, as speculation over monetary policy dominated headlines on both sides of the Atlantic. According to Tradeweb data, Germany’s 10-year Bund mid-yield moved from negative to positive territory over the month to close at 0.16%. Similarly, yields on 10-year government debt in France and Italy rose by 34 basis points to 0.46% and 42 basis points to 1.61% respectively.

October saw major central banks keep their monetary policies on hold. The European Central Bank did so on October 20, when its president Mario Draghi said that “an abrupt ending to bond purchases” was unlikely. Consumer prices in the Euro area were expected to increase by an annualised 0.5% in October, the highest inflation rate since June 2014. Eurostat data also showed that the region’s economy had expanded at an annualised rate of 1.6% in the third quarter of 2016.

Meanwhile, UK GDP grew 2.3% year on year in the three months to September 2016, its fastest growth rate since Q2 2015. The UK 10-year Gilt mid-yield ended the month at 1.24%, having climbed 48 basis points since September 30. In his letter to chancellor Philip Hammond on October 31, Mark Carney said he would not serve the statutory eight-year period of office as governor of the Bank of England, and would instead step down at the end of June 2019.

In the U.S., the release of the Federal Open Market Committee minutes on October 12 showed that September’s decision not to raise interest rates was “a close call”, creating expectations of a rate hike after December’s meeting. Total nonfarm payroll employment increased by 161,000 in October, while the jobless rate dropped to 4.9% from 5% in the previous month. The mid-yield on the 10-year Treasury increased 23 basis points over the month to close at 1.83%, having dropped as low as 1.62% on October 3. However, its Japanese equivalent moved only 3 basis points in October, finishing just below the Bank of Japan’s zero yield target at -0.05%. 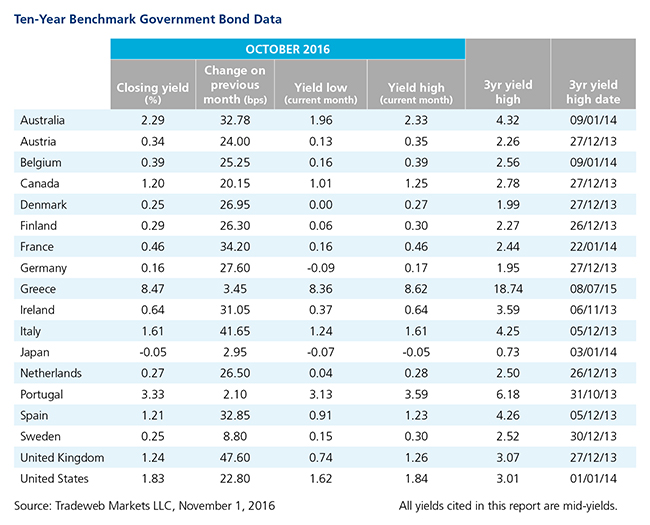