The sell-off in global government bond markets continued in November amid heightened volatility following the surprise victory of Donald Trump in the U.S. general elections. According to Tradeweb data, three of Europe’s peripheral economies experienced the region’s biggest increases in bond yields: Italian, Portuguese and Spanish 10-year benchmark bond mid-yields ended the month more than 30 basis points higher, closing at 1.97%, 3.67% and 1.53% respectively on November 30. However, Greek debt bucked the trend, with the mid-yield on its 10-year government bond dropping by 197 basis points over the month to close at 6.49%. The country’s government launched a new round of talks with creditors in mid-November, as part of the second review of its bailout programme.

Meanwhile, Eurozone consumer prices were expected to increase by an annualised 0.6% in November, the highest inflation rate since April 2014. German inflation rate was expected to remain unchanged at a two-year high of 0.8%. The 10-year Bund mid-yield moved further into positive territory by climbing 7 basis points to finish the month at 0.26%. Elsewhere, UK consumer prices rose 0.9% year on year in October, while Q3 GDP growth rate was confirmed at 0.5%, slowing from a 0.7% expansion in the second quarter. The mid-yield on the 10-year Gilt closed at 1.41% on November 30, 17 basis points higher on the previous month end.

In the U.S., Donald Trump was elected to succeed President Barack Obama in January 2017, in spite of late polls predicting a Hillary Clinton win. Macro asset classes, including government bonds, saw significant year-over-year growth on Tradeweb’s institutional business during November. “Trading volumes have continued to increase on our platforms throughout the month, beginning with volatility immediately around the election,” said Lee Olesky, Tradeweb Markets CEO. “While bond markets have fallen significantly in recent weeks, we are seeing widespread increases in activity across all types of institutions, and in all ranges of maturities.” The 10-year Treasury mid-yield increased 53 basis points over the month to close at 2.37%.

Speaking to business leaders in Nagoya on November 14, Bank of Japan Governor Haruhiko Kuroda said that “the momentum toward achieving the price stability target of 2% seems to have been maintained.” Mr Kuroda hinted, however, that the central bank would adjust its policies to achieve its inflation target, if necessary. The following day, the 10-year JGB mid-yield closed in positive territory for the first time since February 19, 2016, before ending the month at 0.02%. 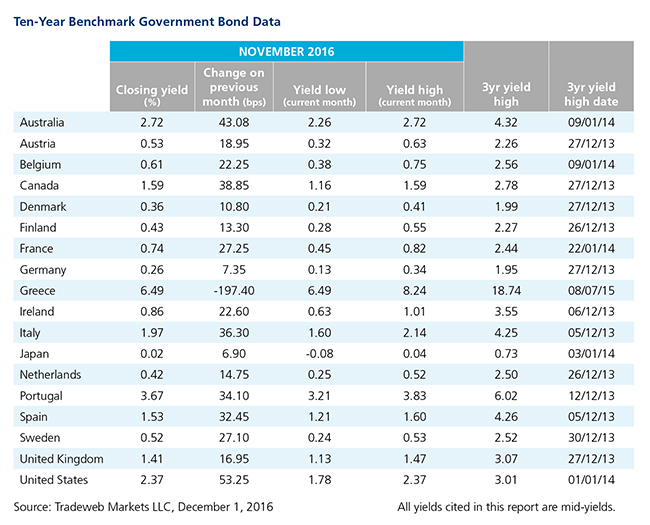