European government bonds continued to rally for the second straight month in May, against a backdrop of continued economic and political uncertainty.

Some of the most significant moves occurred in Portugal, where mid-yields on 10-year government bonds dropped 50 basis points to 3.03% over the course of the month. The moves coincided with the official verdict from the European Commission that the country’s budget deficit had fallen to 2% of GDP, a key threshold indicating recovery from the Eurozone debt crisis. Still, despite improvements noted in Portugal’s economy and unemployment rates at an eight-year low, the country’s debt-to-GDP ratio remains higher than 130%, the highest in the Eurozone after Greece.

Yields on Greek 10-year government bonds also fell in May, contracting 29 basis points to 6.06%. A mid-month quarterly GDP estimate suggested that Greece had slipped back into recession with a 0.1% first-quarter contraction following a 1.2% decline at the conclusion of 2016. That estimate has since been revised upward to 0.4% growth, keeping Greece out of recession and roughly in line with the Eurozone average GDP of 0.5% growth for the first three months of the year.

Modest economic improvement was also noted in Spain amid the closely-watched election of Pedro Sanchez as the leader of the country’s main opposition Socialist Party. Sanchez won the election as party leader just seven months after stepping down in defeat, underscoring the highly fragmented nature of Spain’s current political landscape. Spanish GDP grew 0.8% during the first quarter, and mid-yields on Spain’s 10-year government bond fell 11.4 basis points since April month end to 1.52%.

Across the Atlantic, the Canadian economy has also been in the spotlight as economists and central bankers weigh the potential impact of possible trade disputes with the U.S. Citing continued uncertainty, the Bank of Canada left interest rates unchanged at 0.5% at its May monetary policy meeting. Yields on the Canadian 10-year bond closed 13 basis points lower at 1.42%, after hitting a month high of 1.64% on May 10.

Bond market movements in the benchmark economies of Germany, U.K., U.S., and Japan were more muted during the month. Yields on the German Bund dropped 2.3 basis points to 0.29%, while U.K. Gilts fell nearly 5 basis points to end the month at 1.03%. In the U.S., the 10-year Treasury mid-yield declined 8.4 basis points to 2.20%. Japan was the lone major economy to see its 10-year benchmark government bond yields climb in May, edging up almost two basis points to 0.04%. 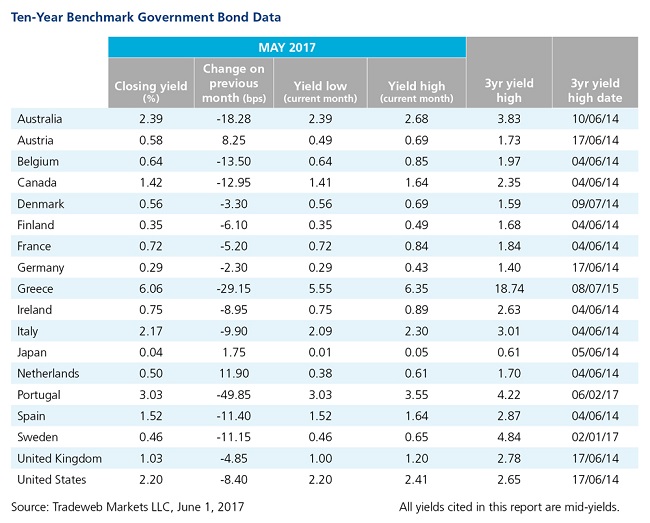