Government bond yields fell sharply in March amid considerable central bank activity and noteworthy economic data releases. All told, 14 of the 18 government securities tracked by Tradeweb for this monthly update experienced double-digit basis points decreases in yield over the course of the month.

Some of the largest moves occurred in Italy, Spain and Portugal. During the month, the Italian 10-year bond mid-yield dropped 29 basis points to 1.78%, while its Portuguese and Spanish equivalents plunged 39 basis points to 1.60% and 1.15%, respectively.

The European Commission warned that Italy’s economy was suffering from severe imbalances that would worsen if spending reforms were undone, after parliamentary elections held on March 4 saw populist, anti-austerity Eurosceptic parties do well. Spain’s government revised its growth forecast for 2018 from 2.3% to 2.7%, and the Bank of Portugal estimated growth would come in at 2.3% this year, but would decline to 1.9% in 2019 and 1.7% in 2020.

In the UK, the Office for National Statistics confirmed the economy expanded by 1.4% in Q4 2017 compared with the same period a year earlier, the weakest expansion among the G7 economies. The Bank of England left its monetary policy unchanged in a 7-2 decision, but indicated it was ready to raise rates in May. The mid-yield on the 10-year Gilt fell 16 basis points over the month to close at 1.35%.

Across the Atlantic, the US Federal Reserve raised its benchmark funds rate target to a range of 1.5% -1.75%, and signalled it was on track to hike rates twice more in 2018. The Treasury 10-year mid-yield dropped 12 basis points over the month to close at 2.74%. In contrast, Canada’s central bank held interest rates steady at 1.25%, indicating it was in no rush to hike. The yield on the country’s 10-year benchmark note finished March at 2.08%, 16 basis points lower on the previous month end.

In his testimony before parliament, Bank of Japan Governor Haruhiko Kuroda stated that the central bank is set to keep its massive monetary stimulus unchanged for the foreseeable future, noting inflation was too far from its target range to begin normalizing. The JGB 10-year mid-yield ticked down by a fraction of a basis point to close at 0.04% on March 30. 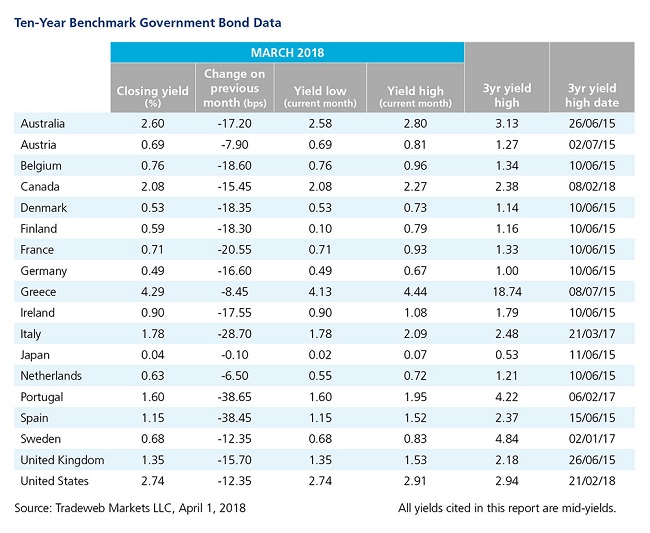