Speaking at the ECB Forum in Sintra on June 27, president Mario Draghi’s remark that “the threat of deflation is gone” was perceived to herald the withdrawal of monetary stimulus by the central bank. According to Tradeweb data, yields on most major government bonds rose over the course of June, breaking the trend from previous months.

In Germany, where recent economic reports signalled further economic growth, the mid-yield on the 10-year Bund climbed nearly 18 basis points to finish the month at 0.47%. The think tank Ifo Institute for Economic Research predicted that the country’s economy would expand 1.8% this year, up from a previous estimate of 1.5%, and 2% in 2018. Meanwhile, mid-yields on 10-year Swedish bonds rose by almost 19 basis points to close at 0.65% on June 30. Swedish consumer prices grew 0.1% month-over-month, compared to forecasts of a 0.1% contraction.

However, the 10-year UK Gilt mid-yield saw the largest increase in Europe, ending June nearly 22 basis points higher at 1.25%, its high point for the month. Eurostat figures published on June 8 showed weak economic growth of 0.2% in the first quarter of 2017, lower than every other member of the European Union. On the same day, a snap election took place amid ongoing uncertainty around Brexit, resulting in Prime Minister Theresa May’s Conservative party losing its parliamentary majority.

Among the peripheral eurozone nations, yields fell for Portuguese, Italian and Greek debt. The move was especially pronounced in Greece, where 10-year bond yields dropped 68.5 basis points to 5.37%. The country and its creditors reached a deal on June 15, allaying fears of a potential default on debt repayments due in July. Greek gross domestic product was up 0.4% in the first three months of the year, after shrinking 1.1% in the previous quarter.

On the other side of the Atlantic, mid-yields on 10-year U.S. Treasury notes rose by 10.4 basis points to 2.3%. On June 14, the Federal Reserve hiked interest rates for the second time this year, up 25 basis points to a range of 1-1.25%. In neighbouring Canada, 10-year government bonds surged by 33.3 basis points to 1.75% amid speculation that its central bank was preparing to raise interest rates from 0.5%, where they have stayed since 2015.

Australia also saw a big yield jump for its 10-year note, which increased 21.6 basis points to 2.61%. The Reserve Bank of Australia decided to maintain its benchmark cash rate at a record low of 1.5%. Elsewhere in the Asia-Pacific region, the Bank of Japan voted to keep monetary policy steady and raised its economic forecasts. The 10-year JGB mid-yield climbed nearly 4 basis points to 0.08%. 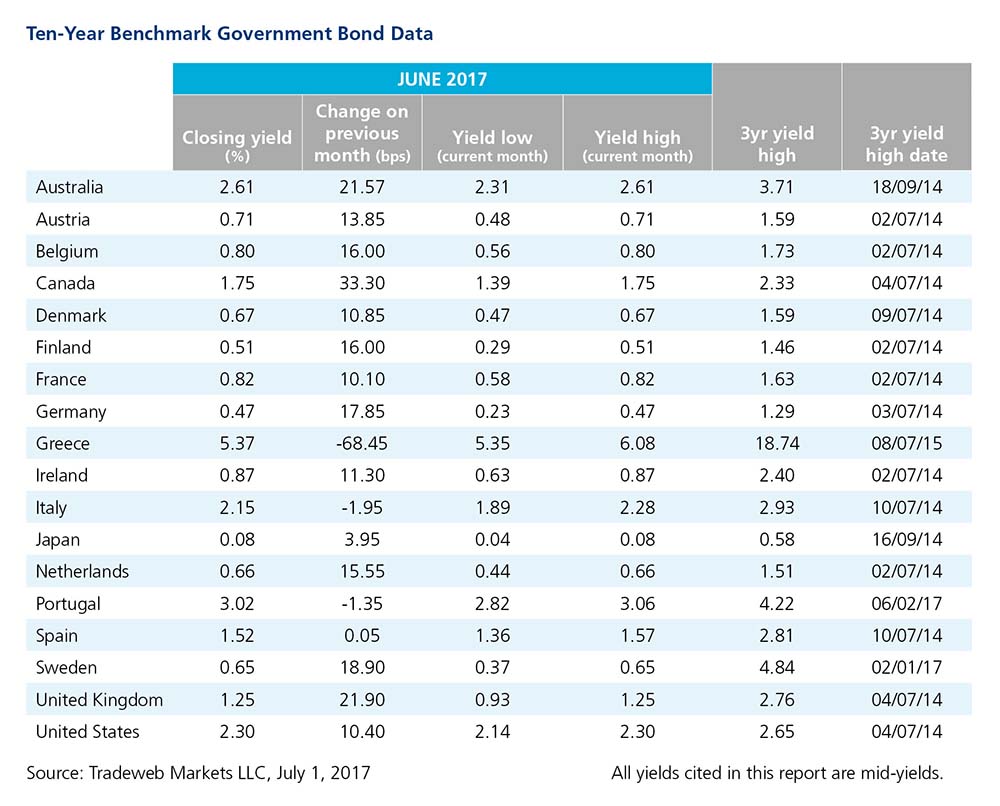