Canada’s government debt took center stage in July. The mid-yield on the 10-year note increased by 31 basis points over the month to close at 2.06%, its highest value since November 2014. The Bank of Canada raised interest rates to 0.75% on July 12, the first hike in almost seven years, citing “confidence in its outlook for above-potential growth and the absorption of excess capacity in the economy.”

In contrast, U.S. 10-year Treasury yields fell by one basis point to settle at 2.29% through the end of July. The Federal Reserve opted to hold interest rates steady in a range of 1-1.25% to support further strengthening in labor market conditions and a sustained return to 2% inflation. Similarly, the Bank of Japan kept its benchmark interest rate at 0.1%, and yields on the 10-year JGB declined by one basis point to close out the month at 0.07%.

In the Euro area, where the European Central Bank announced that it would keep its benchmark interest rate at zero, movements in government bond yields were muted. The largest moves occurred in Portugal, where the yield on the 10-year benchmark note fell 16 basis points to finish the month at 2.86%. The European Commission improved its 2017 forecast for the country’s gross domestic product growth from 1.8% to 2.5%.

Incremental yield movements were observed throughout the rest of the Euro area. Germany’s 10-year Bund yield rose by seven basis points to close out the month at 0.55%. Conversely, mid-yields on 10-year government debt in Italy and Ireland dropped by six and four basis points respectively. Meanwhile, Greece returned to the bond markets for the first time since 2014 with the sale of a new five-year issue on July 25.

Elsewhere in Europe, Swedish 10-year government bond yields rose by seven basis points to end the month at 0.73%. Year-over-year price inflation data for the country steadied at 1.7% versus expectations for a decline of 1.6%. In the U.K., the yield on the 10-year Gilt declined by two basis points to 1.23%, a sharp contrast to the 22 basis point increase seen in June. 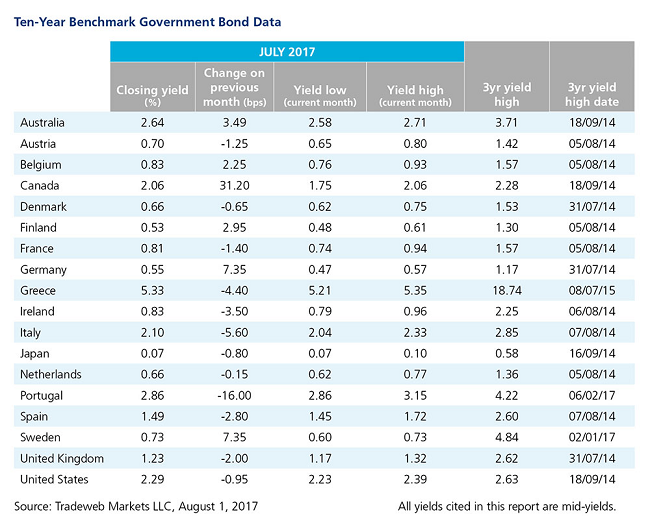