European government bonds suffered a sell-off in January against a backdrop of mixed economic data and geopolitical uncertainty. According to Tradeweb figures, Germany’s 10-year Bund mid-yield ended the month 23 basis points higher at 0.44%, having dropped to 0.19% on January 2. Its 5-year equivalent climbed 14 basis points over the month to close at -0.40%. Preliminary data, published by the Federal Statistics Office, showed that consumer prices in the country were expected to rise by 1.9% in the year to January 2017, the highest inflation rate in three and a half years.

In the Euro area, consumer prices were expected to increase by an annualised 1.8%, beating market expectations of a 1.6% rise. Figures released by Eurostat also estimated that the region’s economy had advanced 0.5% in the last quarter of 2016, following a 0.4% growth in the previous period. Yields on 10-year government debt in Austria and France rose by 27 basis points to 0.68% and 36 basis points to 1.04% respectively.

However, Eurozone peripheral debt experienced the biggest losses. Greece’s 10-year government bond mid-yield surged to 7.8% on January 31, up 67 basis points since the previous month end, as bailout talks between the country’s government and its creditors reached an impasse over a policy reform package. Meanwhile, the mid-yield on Portugal’s 10-year note climbed above 4% for the first time since 2014, after falling as low as 1.54% in 2015. At the end of January 2017, 38.5% of European government bonds were in negative yield territory, down from 45.3% at the end of December 2016.

Elsewhere, government bond yields saw more modest increases. The 10-year US Treasury mid-yield rose two basis points over the month to close at 2.45%, after peaking at 2.52% on January 25. The US economy advanced at an annual rate of 1.6% in 2016, its slowest pace of growth since 2011. In neighbouring Canada, the yield on the country’s 10-year bond finished the month 4 basis points higher at 1.76%. In contrast, Australia's government debt rallied and saw yields for its 5- and 10-year benchmark notes fall by 12 basis points to 2.19% and 8 basis points to 2.69% respectively. 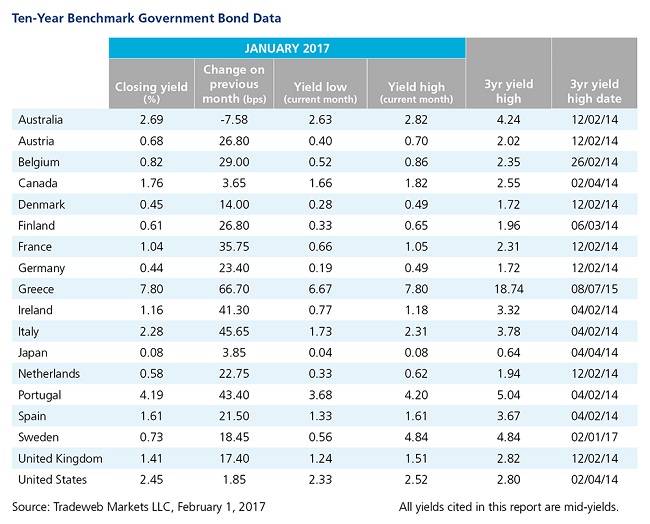