February saw January’s widespread sell-off in European government bonds reverse, with the exception of Spanish debt.  According to Tradeweb data, the mid-yield on Spain’s 10-year benchmark bond ended the month nearly 3 basis points higher at 1.63%, having dropped as low as 1.56% on February 27. The country’s economy grew by 3.2% in 2016, the same as in 2015 and the third consecutive year of expansion.

In contrast, Greece’s GDP shrank 0.1% over the same period, compared to an initial estimate of a 0.3% growth rate. The country’s creditors agreed to resume talks with Alexis Tsipras’ government in Athens, after the latter agreed to adopt tax and pension reforms pushed by the IMF. Greek 10-year government bond mid-yields declined by 64 basis points to close at a month low of 7.16% on February 28.

Amid ongoing uncertainty over the upcoming French presidential election to be held in April, the mid spread between German and French 10-year debt closed at 77.2 basis points on February 21, its widest point since November 2012. Last year Germany’s economy advanced by 1.9%, its strongest pace in five years. The 10-year Bund mid-yield fell by 23.5 basis points over the month to close at 0.2%.

In the US, total nonfarm payroll employment rose by 227,000 in January 2017, the strongest job growth in four months and up from a revised 157,000 in December. Consumer prices increased by an annualised 2.5%, the highest inflation rate since March 2012. The mid-yield on the 10-year US Treasury closed at 2.36% on February 28, nine basis points lower than the previous month end value.

Meanwhile, the Bank of Japan published details of planned asset purchases for the first time since the introduction of its "Quantitative and Qualitative Monetary Easing with Yield Curve Control" programme in September 2016. The 10-year JGB benchmark yield finished the month 3 basis points lower at 0.05%, remaining above the BoJ zero target rate. 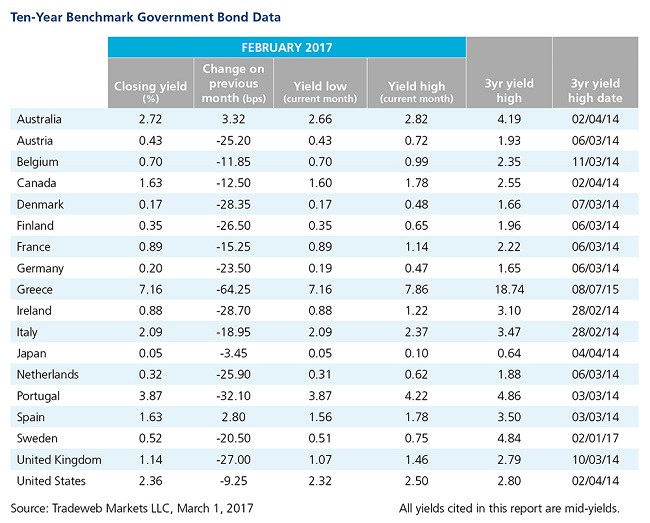