2017 proved to be the year the Greek government bond market roared back to life. The December rally in the Greek 10-year benchmark note drove yields down 122 basis points to close out the month at 4.07%, their lowest value in nearly a decade.

The milestone capped off three straight quarters of economic improvement in Greece, which is expected to see GDP growth of 1.6% for 2017, according to European Commission forecasts. GDP growth of 2.5% is projected for 2018. The country is also planning to exit its international assistance bailouts in the summer of 2018.

Yields on UK and US 10-year government debt also dropped by 14 and 0.5 basis points to end the month at 1.19% and 2.41%, respectively. In the UK, uncertainty around Brexit negotiations continued, and the Bank of England left its interest rate unchanged at 0.5%. Across the Atlantic, the U.S. Federal Reserve raised the federal funds rate to a range of 1.25-1.50%.

Amid ongoing attempts by French President Emmanuel Macron to institute economic reforms, INSEE, the national statistics agency, offered an improved growth outlook for 2017 of 1.9%, compared to a previous forecast of 1.8%. France’s 10-year government bond yields rose 26 basis points over the course of the month to close at 0.79%.

In Italy, where economic growth is projected to be 1.5% in 2017, ongoing political drama is gripping the country ahead of elections on March 4. Benchmark government bond yields finished the year at 2.00%, up 26 basis points over November. Spain, which is facing its own political turbulence as Catalonian drive to independence continues apace, saw benchmark bond yields close the year at 1.56%, 11 basis points higher from November month end.

Sweden’s Riksbank announced that it would hold the main interest rate at -0.5% at least until the middle of 2018. The central bank also stated that 2017 would mark the end of new bond purchases, but noted it will continue to reinvest redemptions and coupon payments “until further notice.” Swedish 10-year government bond yields climbed 4 basis points to 0.77%.

Meanwhile, mid-yields on the German 10-year Bund increased by 5 basis points to reach 0.43% at month end. In mid-December, the Ifo Institute for Economic Research estimated that German GDP would expand by 2.6% in 2018.

Elsewhere, the Bank of Canada left interest rates unchanged at 1%, while the Reserve Bank of Australia held interest rates at 1.5% for the sixteenth straight month. Mid-yields on 10-year Canadian and Australian sovereign debt climbed 15 and 12 basis points to close the month at 2.04% and 2.63%, respectively.

Japan’s central bank also maintained interest rates at -0.1% -- and its target 10-year government bond target at 0%. The mid-yield on the 10-year JGB ended the month one basis point higher at 0.05%. 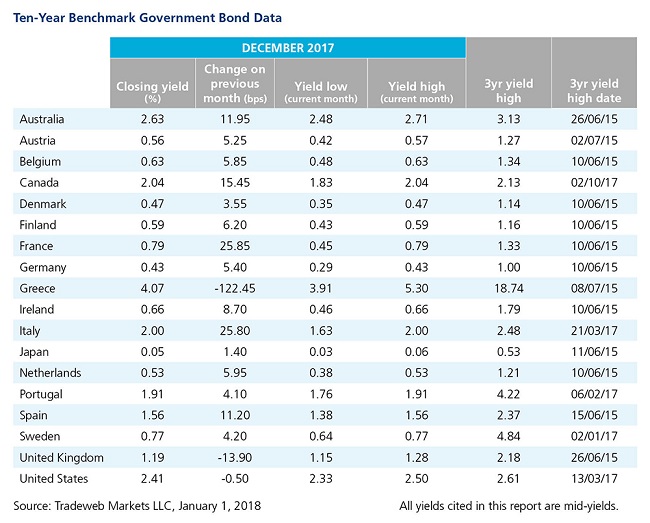