Euro area government bonds rallied in December, with the exception of Greek and Portuguese debt. According to Tradeweb data, the mid-yield on Greece and Portugal’s 10-year benchmark bonds ended the month 64 and 8 basis points higher at 7.13% and 3.75% respectively. In contrast, their 10-year German Bund equivalent declined 6 basis points to close at 0.21%.

Following its monetary policy meeting on December 8, the European Central Bank announced it would extend its asset-buying programme until the end of 2017, albeit at a slower pace. From April 2017, the level of net asset purchases will be reduced from €80 billion to €60 billion per month. The ECB also said it would allow purchases of securities yielding below its deposit rate of -0.4%, and would decrease the minimum remaining maturity for eligible securities from two years to one year.

Elsewhere in Europe, Sweden’s Riksbank decided to maintain its repo rate at -0.5%, and to continue buying government bonds during the first half of 2017. The country’s 10-year government bond mid-yield finished the month nearly flat at 0.55%, having risen as high as 0.67% on December 20.

Similarly, the Bank of England’s monetary policy committee voted unanimously to leave interest rates and its quantitative easing programme on hold amid concerns over higher inflation and slower wage growth in 2017. The mid-yield on the 10-year Gilt fell 17 basis points over the month, closing at 1.24% on December 30.

Across the Atlantic, the U.S. Federal Reserve raised interest rates for the first time in one year and the second time since the 2008 financial crisis. On December 14, Fed chairwoman Janet Yellen announced a 0.25% increase in the federal funds rate to 0.5-0.75%, in recognition of the “considerable progress” the economy had made toward the central bank’s “dual objectives of maximum employment and price stability.” The mid-yield on the 10-year Treasury note closed at 2.43% on December 30, a climb of 6.5 basis points since the previous month end.

Meanwhile, the Bank of Japan’s policy board voted to continue with its "Quantitative and Qualitative Monetary Easing with Yield Curve Control" programme, while upgrading the economic growth outlook. The 10-year JGB mid-yield moved further into positive territory during the month, closing 3 basis points higher at 0.05%. 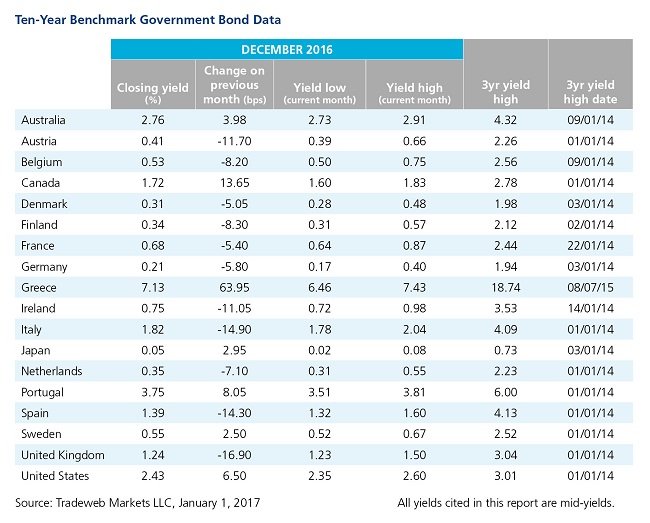