Against a backdrop of geopolitical uncertainty and ongoing speculation about the direction of monetary policy from the world’s major central banks, yields fell across the majority of benchmark 10-year government securities in August. In fact, government bond yields dropped in 17 of the 18 regional markets examined by Tradeweb during the month, with double-digit declines noted in 12 of those markets.

The biggest one-month move occurred in Canada, where 10-year mid-yields plunged 21 basis points to close out August at 1.85%. The Canadian currency, the loonie, has rallied roughly 7% since the beginning of 2017 amid upbeat economic data and stronger oil prices.

Yields also fell in the UK, Germany, and the U.S. in a month of continuing geopolitical tensions. The mid-yield on the 10-year UK Gilt finished August nearly 20 basis points lower at 1.03%. Similarly, its German Bund counterpart closed the month down 18 basis points to 0.36%, and the yield on the U.S. 10-year Treasury note plummeted 17 basis points to 2.12%. Market participants have been closely watching the European Central Bank and U.S. Federal Reserve for possible interest rate increases.

Elsewhere in Europe, 10-year securities for Italy, Spain, and Portugal experienced less dramatic moves, ending August at 2.04%, 1.45%, and 2.82% respectively, and their trading ranges were narrow. The Italian 10-year government bond mid-yield ended the month down 6 basis points, while its Spanish and Portuguese equivalents decreased by 5 and 4 basis points respectively. For the latter, August activity was significantly muted compared to July, when it logged a 16 basis points move, the biggest in Europe. Greece was the only country to buck the trend and see a sell-off, with the mid-yield for its 10-year security rising 14 basis points during the month to close at 5.47%.

In Japan, the 10-year government bond mid-yield fell 7 basis points, ending August at 0%. The 10-year JGB also had the narrowest trading range for the month, from a low of 0% to a high of 0.07%. The country’s GDP expanded by an annualized 4% in the second quarter of 2017, beating market expectations of a 2.5% growth. This was the sixth consecutive quarterly expansion for the Japanese economy. 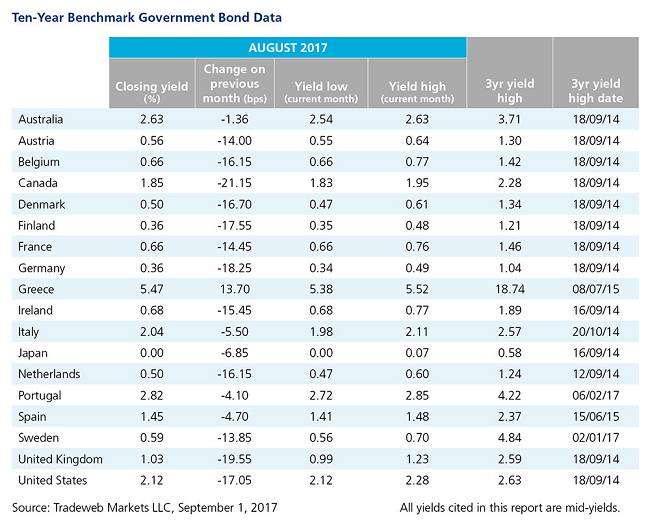