In her testimony before Congress on November 4, U.S. Federal Reserve chairwoman Janet Yellen said that a December interest rate rise was a “live possibility” depending on the state of the economy. Two days later, the U.S. Labor Department reported that nonfarm payrolls had increased by 271,000 in October, the biggest gain since December 2014, while the jobless rate had dropped to a seven-year low of 5%. On November 24, a second estimate by the Bureau of Economic Analysis showed that third-quarter GDP had expanded at a 2.1% annual pace, up from a previous reading of 1.5%. The Treasury 10-year mid-yield ended the month at 2.22%, after closing as high as 2.34% on November 9.

November saw European government debt rally across a range of maturities, with Italian and Spanish two-year bond mid-yields closing below 0% for the first time on November 20 and November 25 respectively. While speaking at the Frankfurt European Banking Congress on November 20, ECB president Mario Draghi stressed that the ECB was prepared to use all the instruments available within its mandate to “raise inflation as quickly as possible”. In Portugal, president Aníbal Cavaco Silva appointed Socialist leader António Costa as the country’s prime minister, ending six weeks of political uncertainty after October’s inconclusive election result. Over the course of the month, the mid-yield on Portugal’s 10-year government bond fell by 22 basis points to 2.32%. Elsewhere in Europe, UK inflation remained at -0.1% for the second month in a row. On November 5, the Bank of England monetary policy committee voted to maintain interest rates at record lows. The yield on the 10-year Gilt fell by almost nine basis points during the month to 1.83%.

The Bank of Japan announced on November 19 that it would maintain the pace of its monetary stimulus. On November 27, the country’s Statistics Bureau reported that the jobless rate had dropped to 3.1% in October, its lowest level since July 1995. Japan’s two-year benchmark bond mid-yield closed at -0.01% on November 30, nearly 1 basis point lower than a month earlier, while its 10-year counterpart ended the month almost unchanged at 0.30%. 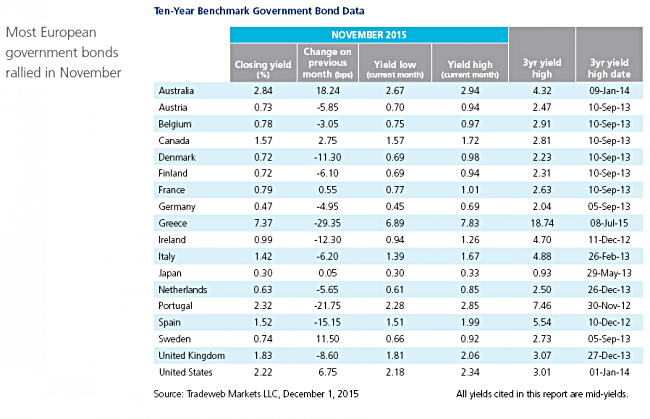