Ireland back in the markets with a successful 10-year issue

On March 18, markets across Europe began to worry in earnest about a plan for an EU bailout of Cyprus that would involve a hefty tax on bank deposits. The markets’ reaction was amplified as Dutch Finance Minister and Eurogroup president Jeroen Dijsselbloem suggested that such a setup should be a blueprint for future eurozone bailouts. Though Dijsselbloem recanted somewhat and the Cyprus deal moved to focus only on very large depositors, the news prompted a considerable flight to safety on yet another renewed scare over the eurozone debt crisis. German and U.S. Treasury debt rallied, with the German 2-year dipping below 0%, while eurozone peripherals fell. The spread between the Greek 10-year and German 10-year jumped above 1000 basis points for the first time since December 31, 2012, a move of more than 70 basis points in one day.

Ireland was back in the market in March with its first 10-year debt issue since 2010, with an oversubscribed €5 billion sale that bolstered its hopes of emerging from its financial crisis bailout.

An early March selloff in U.S. Treasuries gave way to a three-week rally that brought yields lower for the month. Optimism over the U.S. economy and fears of an end to Federal Reserve stimulus had pressured the U.S. 10-year Treasury yield higher in the first week of the month, bringing it back above 2% amid new multi-year highs in U.S. stocks. But that sentiment quickly turned, with the 10-year rallying three straight weeks into the end of the month, prompted by renewed eurozone fears and Federal Reserve comments suggesting that accommodative policy will continue. It was an active month on Tradeweb, with Treasury volume up about 12% from March 2012. 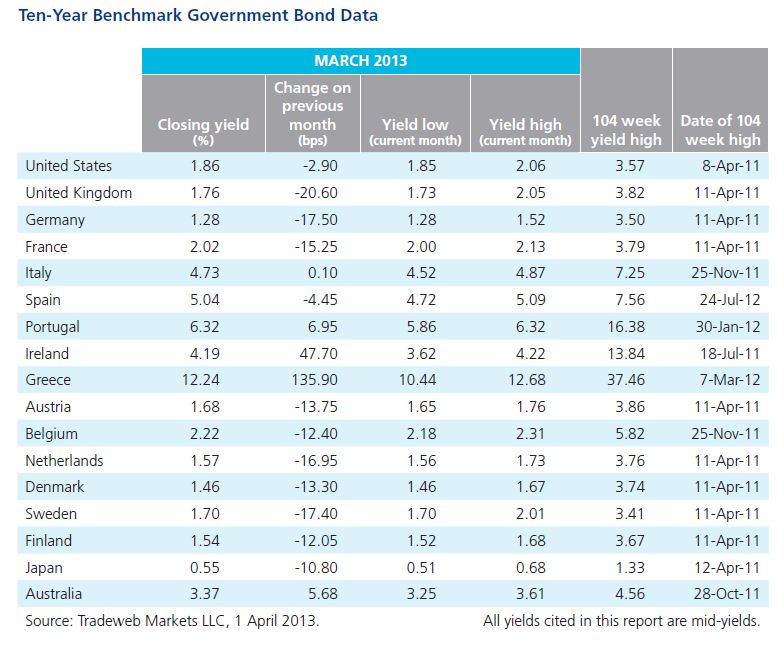