The U.S. economy grew at an annual rate of 1.2% in the second quarter of 2016, well below forecasts of a 2.6% expansion, according to preliminary data published by the Bureau of Economic Analysis on July 29. First-quarter GDP figures were also revised down from 1.1% to 0.8%. Two days earlier, the Federal Open Market Committee had decided to leave the target range for its federal funds rate unchanged at 0.25% to 0.5%. The U.S. Treasury 10-year mid-yield ended the month at 1.46%, having dropped to a near-record low of 1.36% on July 8.

Following its monetary policy meeting on July 29, the Bank of Japan announced a series of additional stimulus measures; however, it opted to keep interest rates on hold. The 10-year JGB mid-yield closed the month at -0.17%, reversing 12 basis points from the -0.29% monthly low reached on July 8. The European Central Bank also maintained interest rates in July. ECB president Mario Draghi said the central bank would continue to monitor economic and financial market developments very closely. Data from Eurostat showed that Euro area GDP growth had slowed to 0.3% in the three months to June 2016, the lowest growth rate in three quarters. Consumer prices in the region were expected to rise by an annualized 0.2% in July, a six-month high.

Meanwhile, Germany became the first Eurozone country to issue 10-year debt with a negative yield at an auction held on July 13. The mid-yield on Germany’s 10-year Bund closed at a record low of -0.18% on July 8, while its Netherlands equivalent closed in negative territory for the first time ever on July 29.

In the UK, the Office for National Statistics announced that consumer price inflation had climbed to 0.5% year-on-year in June. The unemployment rate declined to an 11-year low of 4.9% in the three months to May 2016. At its meeting ending on July 13, the Bank of England’s Monetary Policy Committee voted to leave interest rates and the size of its asset purchases unchanged, before launching a new £70bn bond-buying program and cutting rates to 0.25% in early August. The UK 10-year Gilt mid-yield fell 23 basis points since June month end to close at 0.68% on July 29. 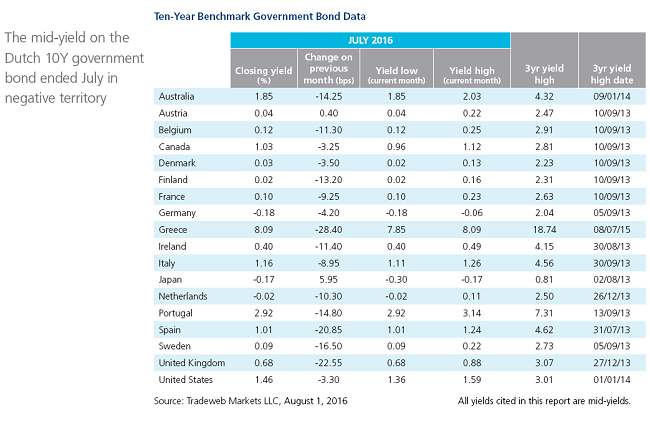