The U.S. Federal Reserve announced that it would cut back its bond buying by an additional $10 billion to $65 billion following Chairman Ben Bernanke’s last FOMC meeting on January 29. The yields on 10-year Treasuries trended downward in January with investors showing a renewed interest in bonds after the announcement which coincided with news about uncertainty around emerging markets growth. The mid-yield on the 10-year Treasury fell 34 basis points from the beginning of January to close the month at 2.67%. Similarly, mid-yields on benchmark 10-year bonds of European core economies also dropped significantly following positive economic news. Yields on Gilts declined 32 basis points to close the month at 2.71%. The German benchmark tumbled 38 basis points to end January at 1.56% and mid-yields on the French 10-year decreased 13 basis points to 2.23%. The U.S. 30-year also saw strong demand and closed the month at 3.62% for the first time since October 29, 2013 when it closed at the same mid-yield. Conversely, 1-month bill yields increased, rising 20 basis points from the start of the month to close at 0.028% at the end of January.

Portugal is expected to resume bond auctions in the first half of 2014 as officials in Lisbon began discussing the nation’s exit from its €78 billion bailout program from the EU and IMF, which ends in May. The sale of its newly-issued 5-year bonds on January 9 successfully secured €3.25bn, and the yields on its 10-year bonds fell below 5% on January 20 for the first time in three years. Mid-yields on the Portuguese 10-year bond closed at 5%, 80 basis points lower than the beginning of the month.

Ireland returned to the international bond market in January, and saw significant demand for its first 10-year bond issue since March 2013, easily raising €3.75bn. A credit rating upgrade by Moody’s on January 17 also bolstered confidence among investors as mid-yields for the nation’s 10-year bond dropped to 3.24% on January 20, a low it reached for the first time in eight years. Similarly, Italy held its biggest bond auction since May 30, 2011, selling a total of €8.2 billion of debt on January 13. The nation’s 10-year benchmark bond mid-yields closed the month at 3.77%, their lowest level since October 18, 2010. In addition, Spanish 10-year bonds also traded at pre-crisis levels following positive economic news of an increase in industrial production and growing exports. The nation’s 10-year benchmark bond ended the month at mid-yields of 3.66%, the lowest level since 2006. Spain also saw strong demand for its debt auctions, raising more than €20 billion in January. 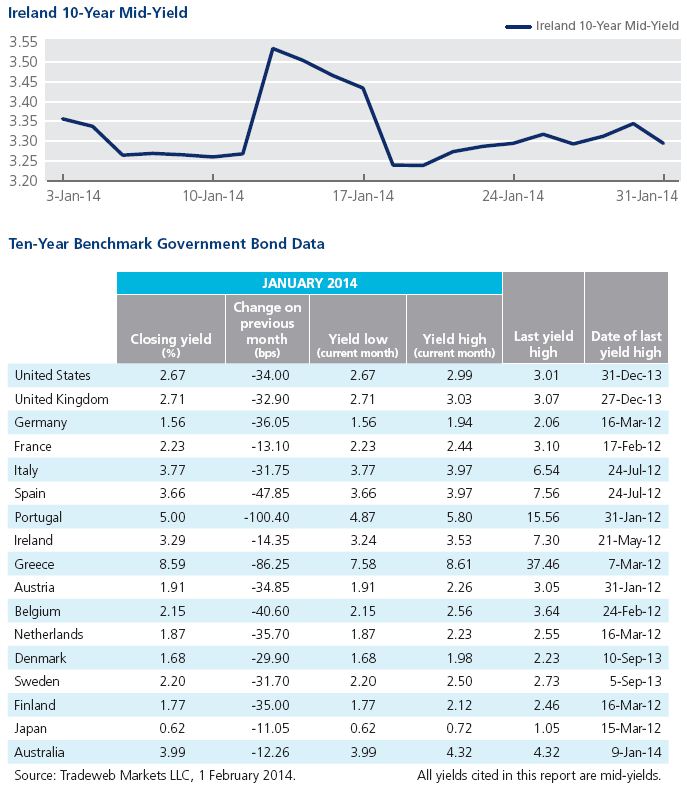