In her testimony before the Senate Banking Committee on February 11, U.S. Federal Reserve chairwoman Janet Yellen said that negative rates were not “off the table” as the central bank was closely monitoring global economic developments. The Treasury 10-year mid-yield ended the day at 1.64%, its lowest closing value since May 2, 2013. On February 26, a second estimate by the Bureau of Economic Analysis showed that the U.S. economy had expanded by an annualised 1% in the fourth quarter of 2015, up from a preliminary reading of 0.7%.

The euro area re-entered deflation in February, as consumer prices decreased 0.2% year on year following a 0.3% rise in the previous month. GDP grew by an annualised 1.5% in Q4 2015, down slightly from 1.6% in Q3 2015 according to Eurostat data. ECB president Mario Draghi said on February 15 that the central bank was “ready to do its part” to stimulate the economy. By month end, 10-year government bond yields had dropped to 10-month lows across several Eurozone countries, including Germany (0.10%) and France (0.47%).

Sweden’s government debt also rallied in February, with the mid-yield on the 10-year note falling 15 basis points to 0.46%. On February 11, Riksbank cut interest rates deeper into negative territory to safeguard its inflation target of 2%.

Meanwhile, UK Prime Minister David Cameron struck a deal with EU leaders to secure a number of concessions affording his country “special status”. However, news of the London mayor’s support for the “Leave” campaign raised concerns over the financial repercussions of a potential “Brexit”. On February 24, the pound plummeted to its lowest point against the U.S. dollar in seven years. The UK 10-year Gilt mid-yield ended the month 25 basis points lower at 1.32%.

In Japan, the unsecured overnight call rate went negative for the first time since 2004, a day after the country’s central bank started to apply a -0.1% rate to current accounts held by financial institutions on February 16. The JGB yield curve extended further into negative territory throughout February. The mid-yield on the 10-year benchmark note dropped below zero (-0.01%) for the first time ever on February 9, and closed the month even lower at -0.06%. 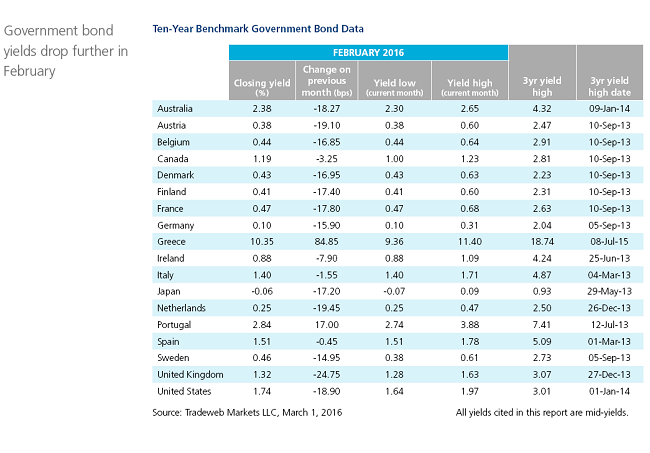