Following lengthy negotiations between Greece’s new government and eurozone finance ministers, a four-month extension of the country’s bailout program was agreed on February 20. The mid-yield on the Greek 10-year government bond closed at 11.14% on February 2, its highest value since July 2013, before finishing the month 156 basis points lower at 9.58%. Meanwhile, the country’s government bond yield curve continued to invert. On February 9, mid-yields closed at 21.20% on the 2-year bond, 16.17% on the 5-year bond and 11.02% on the 10-year bond.

Eurozone GDP data released by Eurostat on February 13 showed that the region’s economy had expanded by 0.3% in Q4 2014, powered by growth of 0.7% in Germany and Spain. As month end approached, government bond yields dropped to fresh lows across the region, including Europe’s peripheral economies. On February 25, Ireland’s 10-year government bond mid-yield dipped below 1% for the first time on record, while the spread of Italy’s 10-year bond mid-yield over its German counterpart ended the month barely above 100 basis points.

Elsewhere in Europe, the Office for National Statistics announced on February 17 that the UK inflation rate had fallen to a record low of 0.3% in January. The following day, the mid-yield on the 10-year gilt closed at 1.85%, hitting a year-to-date high. In Sweden, January’s inflation rate was negative for the sixth month in a row at -0.2%. On February 12, the country’s central bank cut its benchmark lending rate to -0.1% and launched a government bond buying program designed to boost inflation. The Swedish 10-year government bond mid-yield declined to a record low of 0.49% on February 16.

In her testimony before the U.S. Senate Banking Committee on February 24, Federal Reserve chair Janet Yellen signalled that an interest rate hike could take place as early as June 2015. Earlier in the month, the Labor Department had announced an increase of 257,000 in January’s nonfarm payrolls, and revised upwards numbers for November and December 2014 by 147,000. The mid-yield on the 10-year Treasury ended the month at 2%, 33 basis points higher than its February 2 value of 1.67%, the lowest since May 2013. 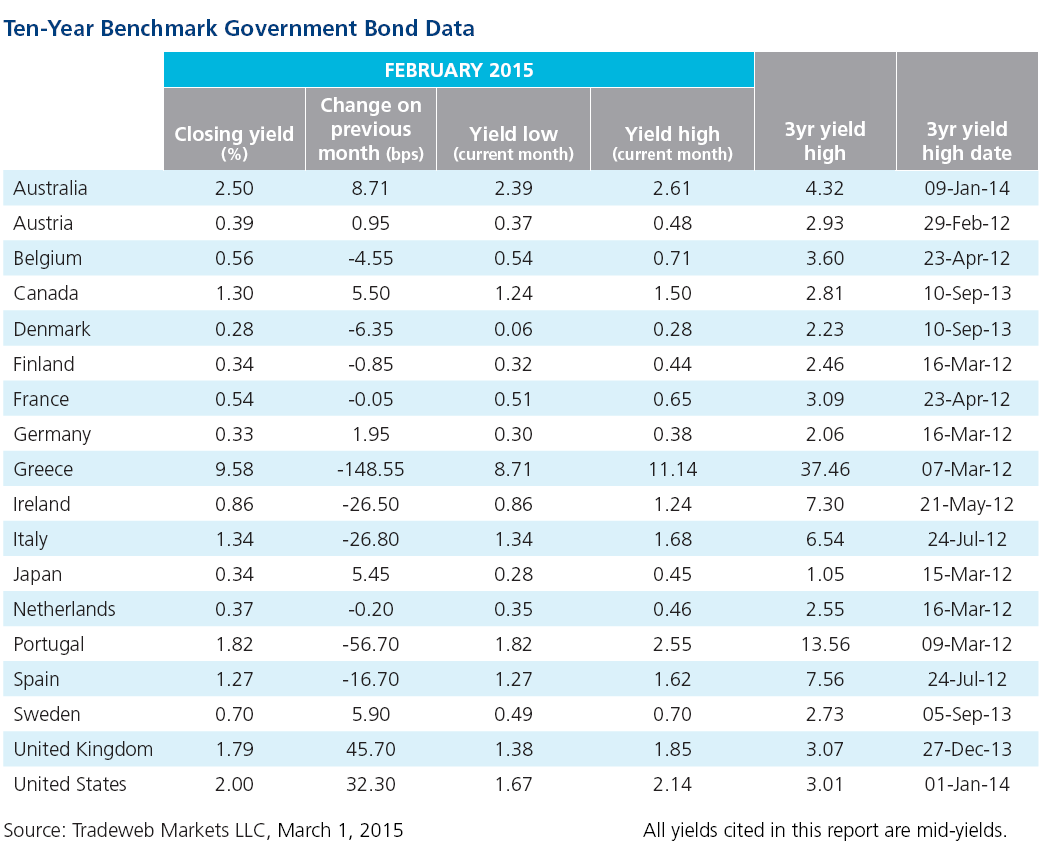