U.S. Federal Reserve Chairwoman Janet Yellen signaled that the central bank would continue scaling back its bond purchases, in her testimony before the House Financial Services Committee on February 11. Mid-yields on 10-year Treasuries fluctuated over the course of the month, starting at 2.58% on February 3, hitting a high of 2.76% on February 12 and dropping to 2.66% at month-end. Similarly, mid-yields on Gilts reached a month high of 2.82% on February 12, the same day Bank of England Governor Mark Carney delivered forward guidance that interest rates would remain steady. The benchmark bond which began the month at 2.69%, ended at 2.72%. Japan’s central bank expanded two loan-support programs to encourage borrowing in the country, while maintaining its monetary policy. Mid-yields on the country’s 10-year bond fell two basis points to end the month at 0.58%.

European peripheral markets saw bond yields decrease in February. Greece’s Public Debt Management Agency hinted at a return to international capital markets, and mid-yields on Greek 10-year debt fell below 7% on February 27 for the first time since April 2010. The benchmark bond which started the month at 8.37% fell 146 basis points to close at 6.91%. Meanwhile, Moody’s Investors Service upgraded credit ratings for both Spain and Italy. Spain’s sovereign debt rating increased one notch to Baa2 with a positive outlook. Mid-yields on the country’s 10-year bond fell 15 basis points from the start of the month to end at 3.50%. Moody’s outlook for Italian debt also improved to “stable” and re-affirmed the country’s Baa2 and Prime-2 debt ratings. Italian benchmark bond mid-yields dropped from 3.77% on February 3 to end the month at 3.47%.

Headlines of political uncertainty in Ukraine dominated much of the news cycle, and the country’s 10-year bond yields saw substantial volatility in February. Mid-yields on the 10-year, which opened the month at 9.73%, jumped 155 basis points to reach a month high of 11.28% on February 19, and subsequently tumbled 181 basis points to close at 9.47% on February 28. 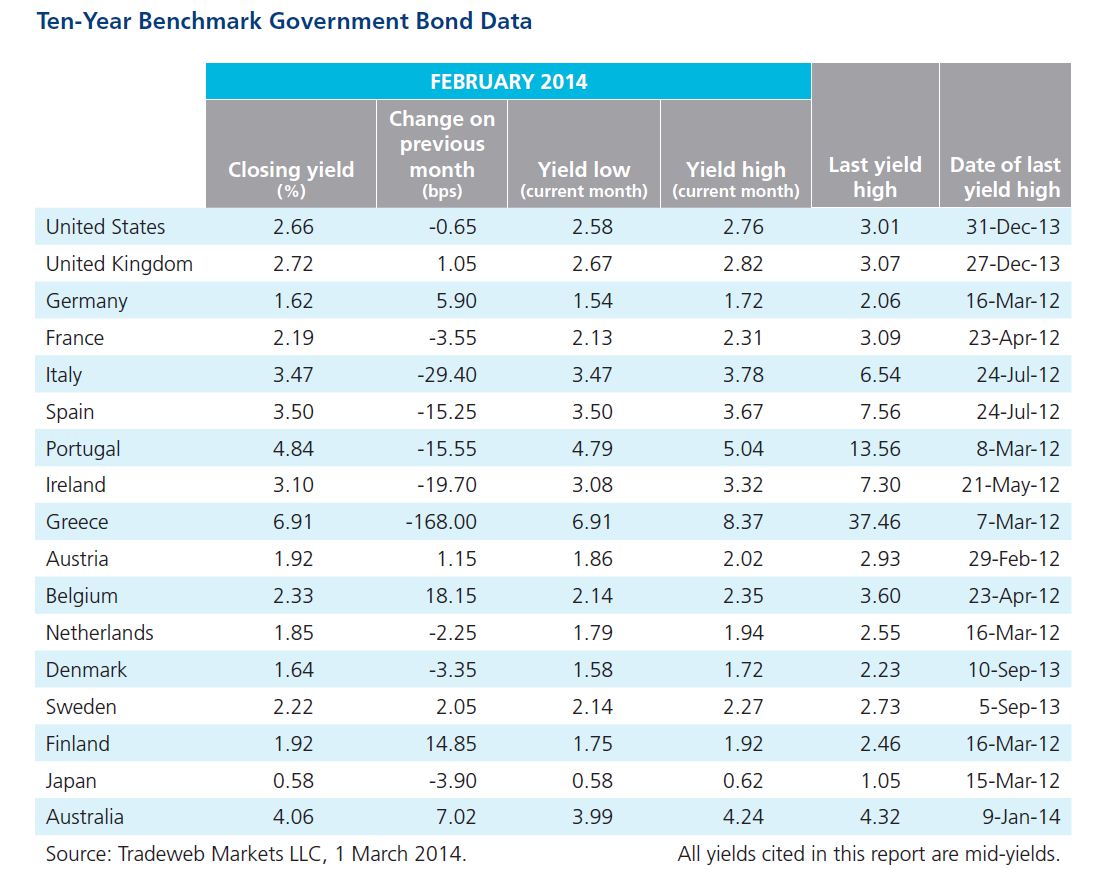