Global government bond markets experienced renewed volatility in August, as concerns over China’s economic growth intensified. The country’s central bank moved to devalue the national currency for the first time since 1994, and also cut interest rates further. On August 24, the CBOE Volatility Index surged to its highest level since January 2009 after a crash in Chinese equities spread to other markets. The U.S. Treasury 10-year mid-yield rose from 2.00% on August 24 to 2.13% on August 25, before closing the month even higher at 2.20%. However, this was still seven basis points short of the monthly high reached on August 5. Meanwhile, nonfarm payrolls increased by 215,000 in July, according to data published by the U.S. Bureau of Labor Statistics on August 7. Later in the month, second-quarter GDP growth was revised to an annualized 3.7%, up from the 2.3% reported initially.

In Europe, government bond yields followed a similar trajectory to that of their U.S. counterpart. The mid-yield on the 10-year Bund jumped from 0.58% on August 24 to 0.74% on August 25. The 10-year Gilt mid-yield rose from 1.67% on August 24 to 1.90% on August 25, before climbing further to 1.97% on August 27. Bank of England governor Mark Carney said on August 29 that the financial turmoil in China was unlikely to affect the chances of an interest rate rise in the near term. Elsewhere, Greek prime minister Alexis Tsipras resigned on August 20, triggering a snap election scheduled for September 20. The mid-yield on Greece’s 10-year benchmark bond fell nearly three percentage points over the month to close at 8.98%.

After five months of negotiations with its creditors to avoid default, Ukraine announced on August 27 that it had struck an agreement backed by the International Monetary Fund to restructure its debt, including a 20% write-off and a four-year extension on repayments. The mid-yield on the country’s U.S. dollar-denominated 7.5% 04/23 sovereign bond finished the month four percentage points lower at 13.16%. 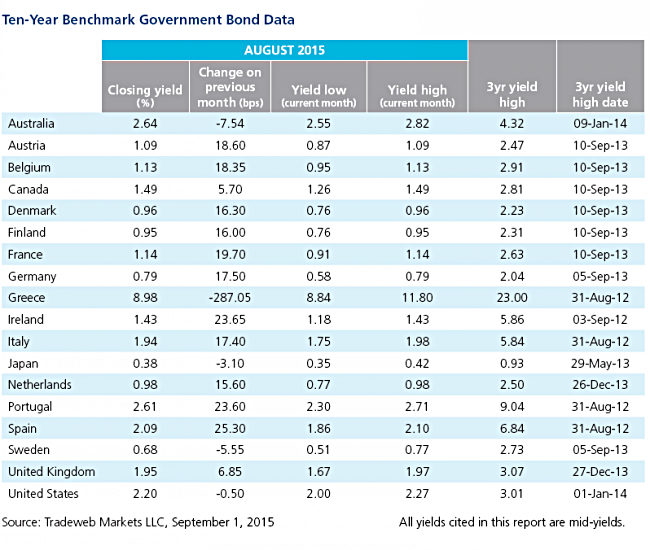