The U.S. economy added just 126,000 jobs in March, the Bureau of Labor Statistics reported on April 3. Total nonfarm payroll employment was also revised downward for January and February resulting in 69,000 fewer gains. The mid-yield on the 10-year Treasury ended the day at 1.84%, its lowest level since February 5, 2015, when it closed at 1.82%. U.S. consumer prices, however, increased 0.2% for the second consecutive month in March due to higher gasoline and housing costs. In its latest policy statement, the Federal Reserve described slower GDP growth in recent months as “transitory”, without offering a timeline for an interest rate hike.

According to Eurostat data released on April 8, eurozone retail sales declined by 0.2% in February after four successive monthly increases. On April 30, the statistics agency said that inflation in the region had increased to 0% in April from -0.1% in March. Several government bond yields in the euro area fell to record lows around mid month, before a sell-off took hold in the final weeks. On April 15, 10-year government bond mid-yields touched record lows in Belgium (0.34%), France (0.35%) and Ireland (0.65%). Shortly after on April 20, record lows were set for mid-yields on 10-year government debt in Austria (0.19%), Finland (0.19%), Germany (0.07%) and the Netherlands (0.15%). But they all moved higher in the latter part of the month, with the 10-year Bund mid-yield climbing to 0.37% at market close on April 30.

Negotiations between Greece and its creditors continued amid growing fears that the country might default on its debt. On April 15, Standard & Poor’s cut Greece’s credit rating to CCC+/C from B-/B with a negative outlook, citing concerns over the sustainability of its debt. Two weeks later, Moody’s also downgraded Greece's government bond rating to Caa2 from Caa1. In contrast to its eurozone counterparts, the mid-yield on the country’s 10-year government bond reached a two-year high of 13.41% at close on April 21 before falling by nearly three percentage points to end the month at 10.48%. Meanwhile, Sweden’s central bank expanded its government bond purchase program by an additional SEK 40-50 billion, bringing the total to SEK 80-90 billion, although it left the benchmark interest rate unchanged at -0.25%.

In Asia, the Bank of Japan trimmed its 2015 inflation and growth forecasts to 0.8% and 2% respectively. Speaking at a news conference on April 30, Governor Haruhiko Kuroda said that the central bank now expected to hit its 2% inflation target sometime between April-September 2016. Japan’s 10-year government bond mid-yield ended the day at 0.33%, almost three basis points higher from the previous market close. 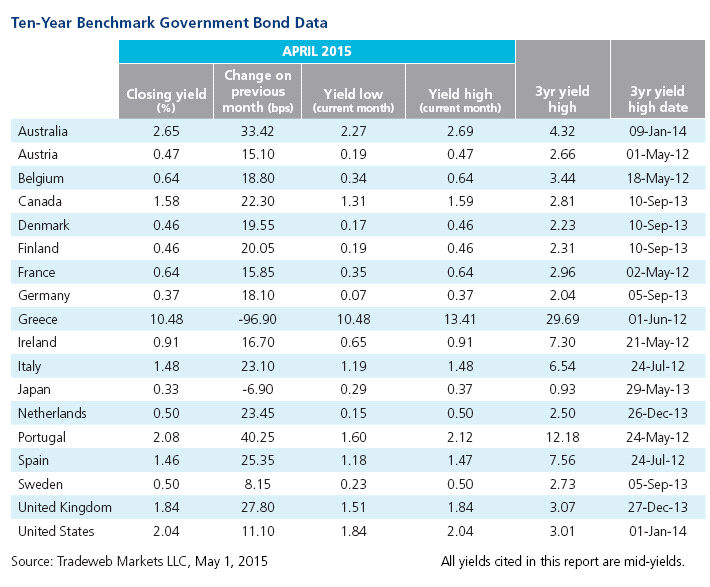