The U.S. 10-year Treasury mid-yield fell nearly 15 basis points to 3.01% over the month, after reaching a high of 3.23% on November 8. The Federal Reserve left the federal funds target range unchanged at 2%-2.25%, but said that additional gradual increases would be “consistent with sustained expansion of economic activity, strong labor market conditions, and inflation near its 2.0% symmetric inflation objective.”

In Europe, Italian 10-year government bond yields dropped 21 basis points to 3.21% on November 30, after touching a 3-year high in the previous month. Tensions over budget and economic plans ratcheted higher between the European Commission and Italy’s coalition government led by Giuseppe Conte, as failure to reach an agreement would result in fines.

Meanwhile, Germany’s Federal Statistics Office noted that the country’s economy had contracted by 0.2% quarter-on-quarter in the three months to September 2018, the first drop since 2015. Yields on the 10-year Bund fell nearly 8 basis points to end the month at 0.31%.

Sweden’s economy also shrank by 0.2% in Q3 2018. It was the first quarterly contraction since 2013, and could potentially derail the Riksbank’s plans to hike interest rates from their current -0.5% level. The Swedish 10-year government bond yield declined 13 basis points during November to end at a month-low of 0.48%.

In the Asia-Pacific region, yields on Japan’s 10-year note dropped by four basis points to finish the month at 0.08%. Data released in the first half of November showed that the Bank of Japan’s balance sheet was worth 553.6 trillion yen ($4.9 trillion) and surpassed the country’s GDP, following years of asset buying aimed at stimulating economic growth. 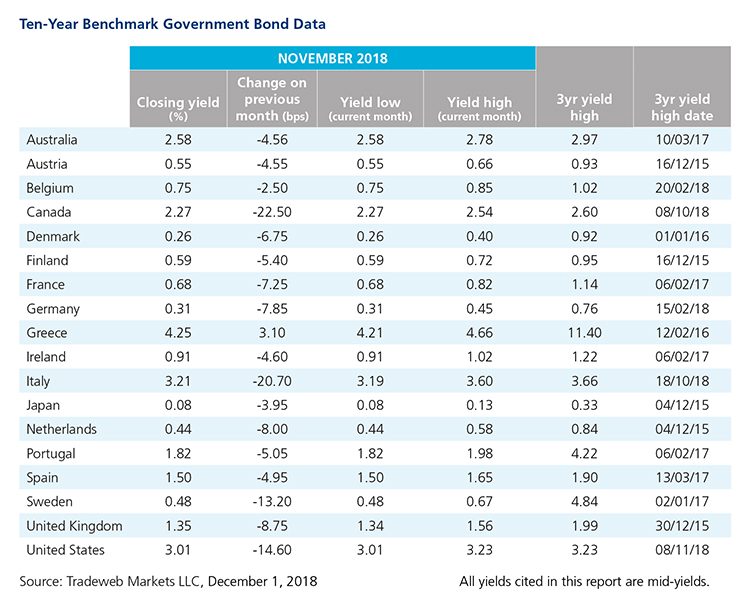