The growing quantity of data that the street could see on screens defined fixed income markets in 2018. Interest rates – and yields - flickered up, prices scuttled down, international and local politics pushed spreads out, and for the first time, electronic quotes lit up in existing asset classes and new markets.

“If you were looking for liquidity in 2018, you were watching, and increasingly executing, through your screen,” said Billy Hult, President at Tradeweb. “Automated execution allowed investors to execute a greater share of trades in government bonds when markets were fast, and source greater volume in credit when prices were slow. Around the world, policy changes drove even more volume to desktops; MiFID II led to increased volumes of derivatives activity on European MTFs, and a liberalization of rules on foreign ownership of bonds in China prompted more than$160 billion of electronic trading.”

What follows is a collection of some of this year’s more indicative data points, and how these stories made their way from the world stage to bond desks.

Negative Interest Rates: The End of An Era

Remember when fixed income investors were earning negative yields on around 30% of all government bonds? It wasn’t that long ago. As recently as July 2017, the yield on the 10-year Japanese Government Bond was -0.29% and it continued to hover around 0% for much of the rest of that year. Even today, yields on German Government Bonds with maturities of 5 years and shorter are still yielding negative interest rates. But the tide is changing.

This year saw a ‘normalization’ of monetary policy among many of the major central banks, with several of those institutions slackening off asset purchasing programs that began in response to the Financial Crisis, and eyeing interest rate rises.

This corresponded with multi-year high yields in benchmark 10-year bonds from the U.S., Germany, Japan, and the UK. The U.S. Treasury 10-year led the pack, reaching a seven-year high of 3.23% in November 2018. 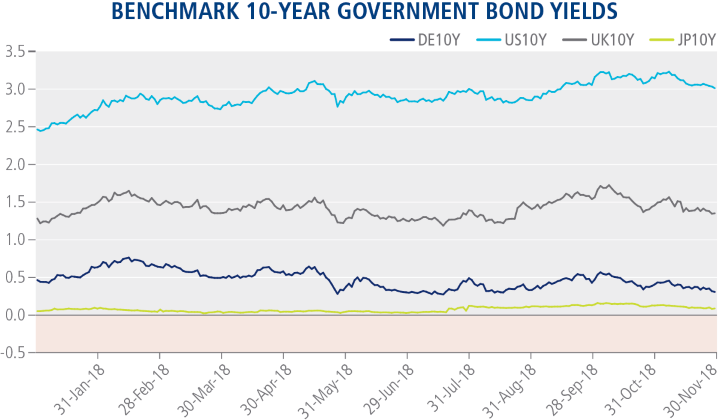 “Save some periodic spikes, the normalization of monetary policy has not yet proved to be the harbinger of widespread, global volatility in fixed income markets,” said Colm Murtagh, Managing Director and Head of U.S. Institutional Rates at Tradeweb. “Still, rates are rising, and markets are moving faster than they have done, and this is driving record volumes in fixed income trading globally. This has prompted a change in the way customers are trading. As an example, a growing proportion of Tradeweb market share is executed through automated protocols like AiEX.”

Year to date, 15.7% of all institutional mortgage and government bond, credit, and ETF tickets on Tradeweb was executed using AiEX technology, five times the amount of automated trading on the platform in 2014. Some of the most significant growth has occurred in U.S. and European corporate credit markets, where 21.1% of all trades executed on Tradeweb were processed through AiEX. 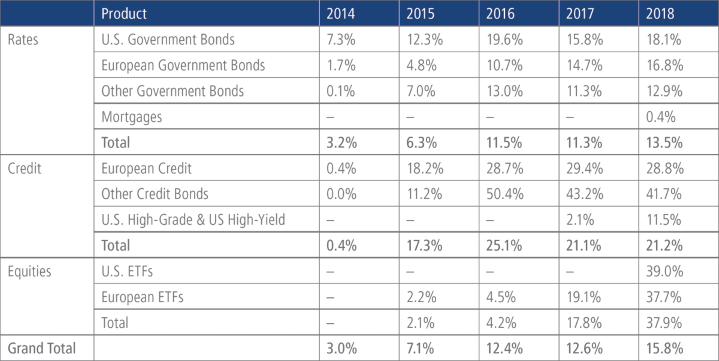 “The power of automated trading and execution has expanded significantly. Even in predominantly manual markets like corporate bond trading, innovations like AiEX are creating significant efficiencies for trading desks by combining automation with a broad all-to-all liquidity pool and advanced metrics,” said Chris Bruner, Head of U.S. Credit at Tradeweb. “Perhaps most vitally, Tradeweb’s Ai-Price is solving the issue of reliable pricing, by creating a better indicative composite price based on data from every corporate bond trade and combining that with unique Tradeweb data. This helps investors and traders access liquidity more efficiently and at greater scale, simultaneously enabling investors to fulfil best execution obligations, and reducing human error.”

There was no shortage of drama in the halls of governments throughout Europe as global trade and budget disputes ranging from Brexit to the tense standoff between Italy’s coalition government and the European Commission progressed to their second, third and fourth acts. As fears of political gridlock climbed, bond markets reflected an increasingly guarded outlook.

In October, U.K Prime Minister Theresa May issued a stern warning that she would not sign a Brexit deal unless the EU resolved ‘big issues’ on future trade agreements. In the days after her remarks, the observed spread between UK Gilt and German Bund on Tradeweb reached 117.1 basis points, the widest since November of 2016. 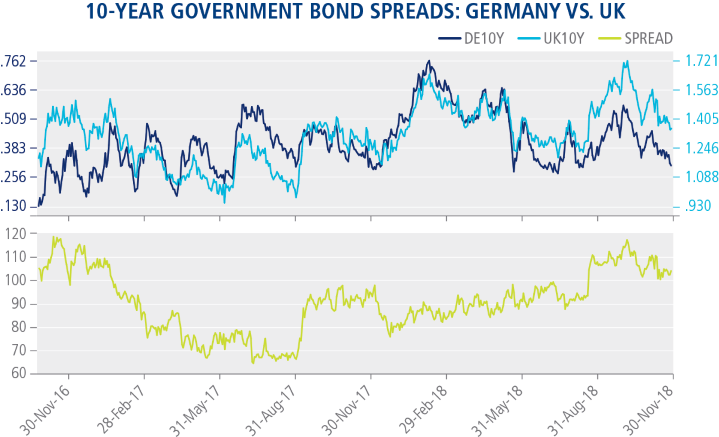 A similar phenomenon unfolded in Italy that same month when European Commission Vice President Valdis Dombrovskis accused the country’s coalition government’s fiscal plans of breaking commitments to the EU. As observed on Tradeweb, the Italian 10-year government bond yield rose by 27.85 basis points in the same timeframe, hitting a three year high of 3.66% on October 18, a spread of 322.5 basis points versus the German benchmark and its widest spread since April of 2013. 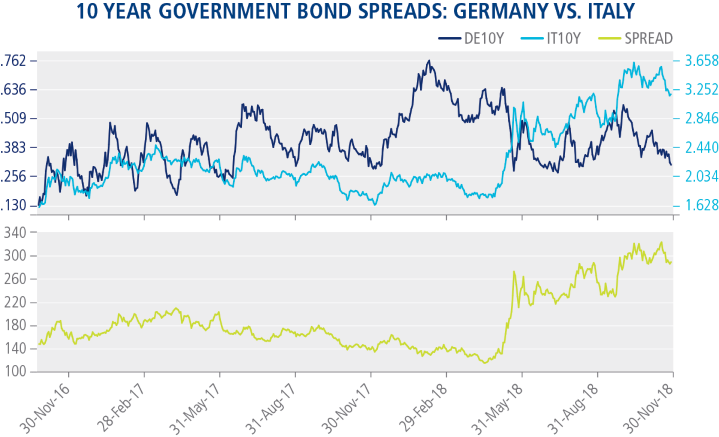 New trading mandates under MiFID II governing European derivatives went into effect at the start of 2018. Initial concerns over the potential affect on liquidity during the transition period went unrealized. Instead, activity on MTFs ramped up quickly, with average daily notional volume (ADV) roughly doubling in each of the first three quarters of 2018.

Activity in rates derivatives on MTFs has grown to be as much as 43% of rates derivatives activity on SEFs. Previous introductions of SEFs in the U.S. and ETPs in Japan and the trading activity that followed suggest volumes on MTFs in Europe may continue to grow during year two. In both the U.S. and Japan, ADV in local currency swaps doubled in the second full year after respective trading mandates were introduced.

“Market participants started to move their business onto electronic execution venues even before MiFID II went live in January, and this growth has been sustained throughout 2018”, said Enrico Bruni, Head of Europe and Asia Business at Tradeweb. “We’ll continue investing in our derivatives offering, as new best execution requirements and the implementation of mandatory clearing and trading for CAT 3 and CAT 4 firms take center stage in 2019.”

Bonds Without Borders: China's Bond Market Gets Ready for its Close-Up

Buried under tariffs and trade war headlines was a counter-narrative; China actually made significant moves to open up its markets to foreign investors in 2018. By August, China had eased or completely removed foreign ownership limits on a number of its key industries, including finance, mining, shipbuilding and aircraft manufacturing. The move followed the May 2017 introduction of the country’s Bond Connect platform, which enables investors in Mainland China and overseas to trade bonds in each other's markets.

Taken together, these two initiatives have sparked a surge of inbound trading activity in the world’s third largest bond market. Tradeweb became the first offshore trading venue to link to Bond Connect in July of 2017, and in September this year launched block trading capabilities, which enable offshore investors to trade on behalf of multiple funds in a single block trade. By the end of November this year more than $160 billion had been traded on the platform, ushering in a new era of electronic access from global markets to Mainland China.

Despite this surge in activity, only 2% of Chinese bonds are currently held by overseas investors. That number is expected to grow as major milestones - including the slated 2019 inclusion of Chinese bonds in global indexes – are passed.

“This is just the beginning for foreign investment in China’s bond market,” said Li Renn Tsai, Head of Asia, at Tradeweb. “We’re seeing enormous interest on the part of our clients around the globe, but overall participation is still relatively low when you consider that there is roughly $11.5 trillion in outstanding Chinese bonds out there in the marketplace. As the trading infrastructure continues to become more seamless, and as more funds and indexes start to include Chinese bonds, we’re going to see this market expand rapidly.”

“Change is rarely instantaneous or sweeping,” said Lee Olesky, CEO of Tradeweb Markets. “The adoption of new trading technologies has certainly enhanced access to markets: data provision is continually improving, and increasing levels of automation throughout the trading cycle are creating greater efficiencies while reducing risks and costs. The next shift will be from rules-based algorithmic trading to machine learning in which computers will analyze the data, determine the next trade, and execute seamlessly over robust, resilient and integrated platforms. From our vantage point, we can see the beginnings of this change afoot in other asset classes. As a first step for the fixed income market, all market participants need a strategy for execution and data to inform their core activities. Tradeweb is the solution for both.”