2016 Year in Review: Watching the World through the Global Fixed Income, Derivatives and ETF Markets

Decades from now, will 2016 be remembered as a year populist politics forever altered the course of history, the year negative bond yields almost became a new normal, or when institutional investors began to embrace a new wave of fintech solutions? From our seat at the global crossroads of fixed-income, derivatives and ETF markets, it’s clear that all three of these trends have dramatically affected markets during the year, creating far-reaching, behavioral and structural changes that we’ll be talking about for many years to come.

The Brexit vote, the U.S. presidential election, record low/negative yields in sovereign and corporate bonds, the continued influence of algorithmic trading and electronic order management – these have all influenced our world with considerable implications on the future. To help put them in perspective, we looked back across our 2016 trading data to spotlight several key milestones of the year.

Based on our view across more than 20 marketplaces, and with over $400 billion in average notional volume being executed daily on the Tradeweb Markets platforms, these were some of the most significant events affecting trading over the course of 2016:

Negative Yields Become a Fact of Life in Europe and Japan

A series of unprecedented monetary policy moves drove record low interest rates throughout Europe and Japan this year. It began in January 2016 when the Bank of Japan stunned markets by cutting benchmark interest rates to -0.1%, the first time in history that the country ever set a negative deposit rate. The European Central Bank followed suit in March, cutting its benchmark rate even further to -0.4%.

The trend was even more pronounced in the corporate bond market where just over 6% of European credit offerings on Tradeweb carried negative yields in January and approximately 30% had negative yields by the beginning of October. The chart below depicts the overall percentage of outstanding debt with negative yields throughout European and Japanese government and EUR-denominated investment grade bond markets.

The U.S. Federal Reserve entered 2016 having just raised the Federal Funds rate for the first time since 2006 on December 16, 2015. U.S. stock markets opened with their worst two-week performance in history and after just 10 trading days, the S&P 500 index was down 8%. While stocks eventually rebounded and broad-based economic indicators continued to show improvement over the course of the year, the Fed didn’t raise rates until December.

Accordingly, benchmark 10-year U.S. Treasury yields spent most of the first half of the year in freefall, hitting an all-time record low of 1.37% on July 8, 2016 (see chart below). Since then, yields have experienced a gradual climb, culminating after a quarter point increase of the Federal Funds Rate to between 0.5% and 0.75% on December 14, when the 10-year Treasury bid-yield closed at 2.52%.

Brexit and U.S. Election Shock Bond Markets and Everyone Else

Less than five hours before the results of Britain’s European Union (EU) referendum vote would become public, professional betting markets were putting the odds that the country would remain a part of the EU at 88%. The odds makers were wrong. But they weren’t the only ones caught off guard. Brexit was not priced into financial markets and the impact of the decision was swift and immediate.

On June 23, the day of the Brexit vote, 10-year UK Gilt yields opened on Tradeweb at 1.325%. By the end of the day on June 24, yields had fallen 22 basis points to 1.103%. Trading activity increased significantly with the volatility in the marketplace, and we saw a 20% increase in volume the day after the Brexit vote v. our average daily trading volume. Tradeweb Gilt volume in June also increased 19% over the previous month. By mid-August, yields fell to historic lows of 0.518%. 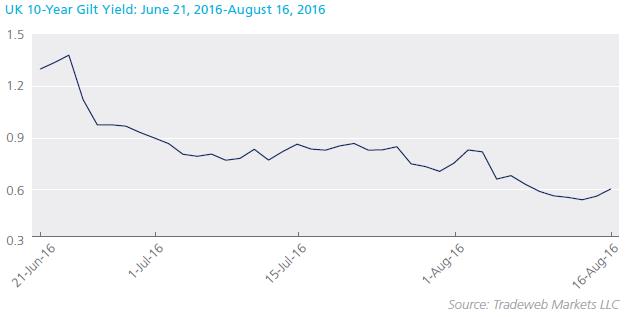 Later in November, the U.S. election brought its fair share of volatility to the marketplace. Tradeweb recorded its highest volume month since the credit crisis, supporting more than $7.9 trillion in trading activity after significantly increasing volumes in September and October. The surge was led by widespread trading from all types of institutions in all maturities of macro products, including government bonds (Treasuries and European government bonds) and derivatives.

The implementation date for the Markets in Financial Instruments Directive II (MiFID II), a cornerstone of the European Commission’s financial services reform, was delayed in May of 2016, pushing its formal start date to January 3, 2018. Though the regulation will not go into effect for another year, market participants will spend much of 2017 readying themselves for the law’s new reporting and transparency requirements.

One study from IHS Markit and the Boston Consulting Group estimates that preparations for MiFID II will cost the financial services industry $2 billion next year alone – including current progress with category 1 and category 2 clearing obligations. According to a Tradeweb Markets analysis of feedback from fixed income and derivatives market participants, some of the biggest hurdles confronting firms as they brace for the new rules are:

Fortunately, as more trading activity continues to move onto electronic platforms, much of the heavy lifting that accompanies MiFID II compliance is being incorporated into the trade workflow.

U.S. and European regulators reached a milestone agreement in February on cross-border clearing equivalence. Under the agreement, the U.S. Commodity Futures Trading Commission (CFTC) and the European Securities and Markets Authority (ESMA) recognized one another’s supervision of clearinghouses as equivalent to their own.

The decision was significant for a number of reasons: for one, it put an end to speculation that conflicting jurisdictional rules governing clearing would cause regional fragmentation of the $544 trillion global derivatives market. It was also evidence of a collaborative relationship between U.S. and European regulators to work through situations in which rules are not perfectly aligned – this will be critical as MiFID II implementation processes alongside a new CFTC regime in the U.S.

The key areas of global derivatives market reform that were harmonized include:

The election of Donald Trump as the 45th President of the United States shocked institutional financial markets around the world. U.S. Treasury trades processed on the Tradeweb platform on November 9 were almost double Tradeweb’s 60-day average Treasury trading volume. This was also 59% higher than what we saw on June 27, 2016 following the Brexit referendum, and 21% higher than what we saw immediately following the 2012 U.S. presidential election.

The impact of the U.S. election was immediately apparent in European derivatives and ETF markets as well. When benchmarked against total trading volumes for the third quarter of 2016, total volumes in Credit Default Swaps (CDS), Interest Rate Swaps (IRS), and ETF markets on Tradeweb more than doubled on election night 2016 and continued to surge through November 10. The table below depicts the magnitude of average daily trading volume increase across the three asset classes using Q3 2016 as a benchmark for market volumes:

ETFs continue to win over the institutional fixed-income marketplace. According to a Greenwich Associates study, 65% of institutional ETF investors are now using fixed income ETFs, citing increased liquidity as the most critical driver of continued investment. The same study also found growing use of ETFs in conjunction with derivatives as a hedging tool. More than half of the institutions in the study had replaced some derivatives positions with ETFs.

It’s a trend that’s been unfolding for some time on the Tradeweb Markets ETF platforms. In December, the Tradeweb U.S. ETF platform surpassed $23 billion notional volume traded year to date; just 10 months after it launched, with approximately 40% of executed trades comprised of fixed income ETFs. In Europe, where Tradeweb has supported ETF trading since 2012, average daily trading volume now tops €580 million. The following chart depicts the sharp growth trajectory in U.S. and European ETF trading on Tradeweb over the course of 2016:

The gradual increase of electronic derivatives trading was probably the biggest theme for Swap Execution Facilities in 2016. Swaps trading on electronic platforms has simply built successively stronger month-over-month volumes during the year.

According to the December 2016 analysis of global SEF volumes from ClarusFT, the total volume of USD interest rate swaps trading on SEF platforms was 48% higher in November than it was in October, with about $1.5 trillion notional trading over the course of the month. In terms of the overall SEF marketplace for IRS, Tradeweb has been a consistent volume leader over the past several months.

None of this, of course, would be terribly noteworthy were it not for the launch of mandatory SEF trading just over two years ago. Since then, market participants appear to have fully embraced electronic trading on SEFs, and are leveraging its benefits even in periods of increased volatility. For example, more than $690 million in Delta/DV01 was traded on Tradeweb in December 2016. 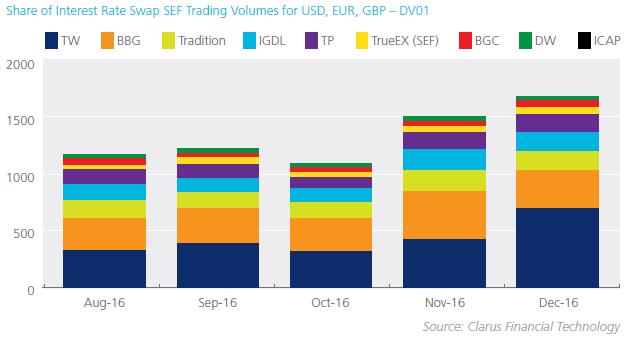 Alexa, which bond would fit best in my portfolio? No, institutional credit traders are not currently using the Amazon Echo to guide their portfolio strategies, but the same technology that lets the little robo-assistant know that you need paper towels and like to listen to John Coltrane is changing the way institutional credit portfolios are constructed in 2016.

As the pool of corporate bond liquidity continues to grow, along with demand from market participants for new ways to efficiently discover liquidity and access inventory, many of the lessons learned in the development of electronic markets for Treasuries and Mortgage-backed Securities (MBS) are currently being layered with more data and analytics to help investors unlock trade ideas.

Earlier this year, Tradeweb expanded its pre-trade data set in U.S. Credit and enhanced workflow management in the platform. Now with unparalleled access to streams, runs, inventory and axes in one place, investors can leverage this information to automate parts of their workflow – streamlining informed price discovery and counterparty selection. Finding the right bonds, at the best price, from the right counterparties has never been faster and easier. Stay tuned for more in 2017!

The Securities and Exchange Commission (SEC) approved a plan submitted by the Financial Industry Regulatory Authority (FINRA) that will mandate centralized reporting of all U.S. Treasury trades for the first time in the history

of the world’s most liquid market. The decision was attributed in part to the “Flash Crash” of October 2014 and the ensuing investigation, which found that roughly half of all U.S. Treasury trading volume comes from algorithmic trading firms or Principal Trading Firms (PTFs).

In practical terms for the marketplace, firms trading electronically will have this reporting automatically integrated into their trading workflows. For those still trading by phone, an additional layer has now been added to the process in terms of pre-trade information and post-trade reporting.

Looking Ahead in 2017: Data and Automation to Drive Electronic Fixed Income Growth

For nearly two decades, marketplaces like Tradeweb have worked to build scalable infrastructure to support the growing electronification of the fixed income and derivatives markets. This has allowed market participants to effectively use technology to access a larger network of liquidity, while leveraging more streamlined workflows and trading protocols.

Voice trading still plays an influential role, but the percentage of volume traded via the telephone or on chat will change in 2017 as the adoption of e-trading accelerates.

Electronic platforms have enhanced the trading process and delivered scalable efficiencies to workflows, and in the future, big data will be used to inform their systems to become smarter, faster and better.

There will also be greater operational efficiencies empowered by data science and integration with electronic trading. The trading network as it exists today has given rise to comprehensive breadth and depth of data, and using that data to deliver tools that support investors' strategies will give rise to Intelligent Execution and the next wave of electronic trading. This new level of intelligence will enable traders to focus more efficiently and trade with better execution through a more optimized workflow.

The industry is primed for an evolutionary leap in 2017 as market participants will be able to access more information with better analytics to support their trading activity in real time. Integrating the insight derived from data will inform centralized markets like Tradeweb with intelligence that increases investors' access to more liquidity and in the most effective, efficient ways possible.